(as included in the The Journal of Regression Therapy Volume ΧII, No. 1, Fall 1998) 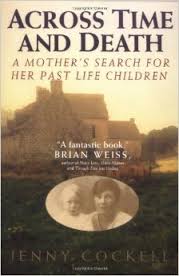 A fascinating book recounting the author’s successful search for her past-life children. The author today is married, has two children, and lives in Northampton shire, a County in Central England.

Throughout her childhood, Jenny Cockell had recurring dreams of a woman named Mary, who died in childbirth with her eighth child. Growing up, she had continuing memories of Mary’s life: Her children, a cottage near a small hamlet, roads, woodlands, boggy meadows, a stream, the local church, a butcher’s shop, a railway station, and other landmarks where Mary and her family lived, all of which later proved to be accurate.

She remembered Mary as a church-going Catholic; she also remembered many other day-to-day events in Mary’s life. Jenny’s memories of people, places, and events placed Mary’s life span as from 1898 to the 1930s, in Ireland. From examining maps, Jenny was able to determine that Mary had lived at a place called Malahide, just north of Dublin.

As a child, although she was afraid of her father, Jenny was fortunate in being able to tell her mother of her dreams and memories without fear of censure. Jenny also had dreams about events before they happened, and later came to recognize that she has certain psychic abilities.

As Jenny matured, attended school and college, married and had children, her memories of the life as Mary did not fade, as have many of the numerous childhood memories of past lives investigated and reported by Dr. Ian Stevenson. Later, Jenny encountered a hypnotist doing regression research, and by means of a number of hypnotic regressions, she relived many of the experiences and events of Mary’s life.

Eventually, Jenny’s memories of her past life as Mary, accompanied by a sense of guilt and responsibility as Mary for dying and leaving her children on their own, led her to search for verification of the existence of her life as Mary. In 1989, Jenny flew to Malahide for a two-day visit. In her short time there, she was able to locate and confirm the existence of many of her remembered landmarks.

Later, through correspondence and with the help of acquaintances, Jenny was able to contact an older resident of Malahide who remembered Mary, whose last name was Sutton, her husband, the cottage, Mary’s death, and that her children had been sent to orphanages as their father would not care for them.

Now, at the age of thirty-five, Jenny felt Mary’s maternal responsibility to find all of Mary’s children, although nearly sixty years had passed since Mary’s death. Over the next several years, by searching records, newspaper stories, and correspondence, she located the baptismal records of six of Mary’s children. She later learned through contact with a grandchild of Mary’s that there had been eight children.

In 1990, Jenny located and visited in person with Mary’s oldest son, who was then seventy-one years old. Over time, this meeting led to contact with four of the other children. Eventually all of these five children accepted Jenny as either the reincarnation of their mother Mary, or that Mary was speaking through Jenny. The other three children are either deceased or not yet located. The BBC made a documentary about Jenny’s experiences.

Jenny Cockell is not a professional writer. She tells her story plainly and simply, which lends it authenticity. Across Time and Death is described by Brian Weiss as a “fantastic book.” and it would be difficult to disagree.