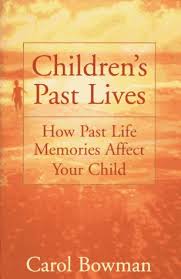 Seldom has a book come out in any field with more potential impact on society than Carol Bowman’s Children’s Past Lives. The information regarding the former experiences which impact children’s behavior today could revolutionize our educational system, the psychological approach to children’s problems, and parental responses to the aberrant behavior of their offspring.

There is probably no stronger evidence in our society today of the validity of the reincarnation hypothesis than the plethora of children who, from the ages of two to eight, spontaneously report in detail experiences about which they could have no knowledge in their current life.

This book is, indeed, long overdue and sorely needed in a society which is spiritually coming of age and recognizing that humans are spiritual beings created for all time. Death as we know it has no meaning because death is just another beginning, and many souls being born at this time bring that knowledge with them and are able to report physical experiences they have had in previous incarnations. However, seldom is this knowledge beneficial to the child because of the criticism directed to him or her by parents and society. It does not take long for children to realize they cannot reveal their innermost thoughts and feelings without suffering punishment or ridicule.

Bowman’s own two children opened the door for her to a whole new field of inquiry and then a dedication to researching cases of children who recall previous lives. In Children’s Past Lives she shares her findings with the world. Her five-year-old son was terrified of loud booming sounds, her nine-year-old daughter was reduced to hysterics by house fires. In both cases a hypnotist friend regressed the children and they vividly reported past-life experiences which explained their fears. The son had been badly injured in the Civil War with cannon booming around him, and the daughter had died in a house fire in which she was trapped.

The recall completely eliminated the fears her children had suffered so intensely. These exciting results so impressed Bowman that she determined to find out if other children had such recall experiences. She discovered that literature in this field was scant, though she did find enough to convince her that others had found evidence of past-life recall by children. She then advertised in a national parents’ magazine for parents to contact her if their children had recalls of past lives, and was invited to appear on radio and TV. The response from parents was overwhelming.

Thus encouraged with hundreds of cases of children who spontaneously reported past lives, Bowman wrote Children’s Past Lives with the hope that it would educate the public to this unlimited resource available to parents, teachers, psychologists, psychiatrists, physicians, and all who work with children.

Her case histories alone make the book fascinating reading, but there is much more than just case histories in Bowman’s book. She identifies four signs in children that indicate memory rather than fantasy: 1) a matter-of-fact tone in their description; 2) consistency over time; 3) knowledge beyond experience; and 4) corresponding behavior and traits.

Her chapter on what parents can do is practical and within the capacity of any parent. She deals with the religious aspect in a common sense manner, presenting historical facts which support the reincarnation hypothesis and reconcile it with Christian mysticism.

In her chapter on death she presents powerful evidence for the belief in the continuity of life, and comforting evidence to all who have lost loved ones, that there is reason and purpose in all of our experiences.

As the reviewer of this wonderful book, may I suggest that every reader take the time to sit quietly and meditate on the benefits to children everywhere if their emotional problems were addressed from the standpoint of their origins in past lives rather than with punitive measures and/or drugs being applied in hit-or-miss solutions which seldom are successful. Then recommend the book to all of your friends, especially those who have children or grandchildren, talk about it to everyone you know and above all, send out your thoughts to everyone who would be receptive. Use your imagination to realize the power this one concept has to mitigate the suffering of untold numbers of children and start them on a path of self discovery and spiritual freedom.

Bowman has given us a superlative book, well written and with a message for everyone of all ages. It is far more than a book about children. Many adults will find answers for their own problems in her graphic case histories. Children’s Past Lives deals with the full spectrum of life, including its origin, meaning, and purpose.

Reincarnation and Biology: A Contribution to the Etiology of Birthmarks and Birth Defects – Ian Stevenson