(as included in the The Journal of Regression Therapy Volume ΧIII, No. 1, Fall 1999) 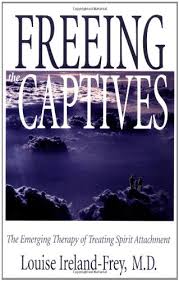 Everyone who is interested in hauntings and the spirit world will be excited about this new book, which has just been authored and published by Dr. Louise Ireland-Frey. It is a truly comprehensive work, covering the field in a well-defined and detailed manner.

When I get a new book I always start reading with the Foreword and the Introduction. In Dr. Ireland-Frey’s book the Foreword is a masterpiece of condensed historical facts in this field. Great figures such as Zoroaster, King Solomon, and the mother of Gotama Buddha are credited with practicing exorcism.

The conflicts between demonology and the scientific approach to mental illness are briefly outlined. Modern spiritualism, in 1837, brought into prominence the tangible evidence of spirit communication. Dr. James Hyslop, professor of logic at Columbia University, is credited with being the true pioneer in a systematic investigation of spirit possession. One other name must be added to this list, Dr. Carl Wickland, and he is given the credit he deserves for his seminal work with possession and obsession. It should be noted that the leaders of these investigations were all men of considerable stature, most of them holding medical degrees.

As I was reading the Foreword, my own enthusiasm about the book increased and I eagerly looked forward to the first chapter. When I turned the last page of the Foreword and discovered that Dr. William Baldwin had written it, I had a wonderful feeling of kinship. Dr. Baldwin and I had been working partners when we attended an early workshop with Dr. Edith Fiore.

Now to the fascinating investigation of spirits and their interaction with living individuals. Since Dr. Ireland-Frey is a physician, her approach to the subject is objective, critical and analytical. She describes without hesitation her own fears, blunders, and feelings of inadequacy when she first began working with trapped spirits. For all who believe in destiny and life purpose, it will be obvious that Dr. Ireland-Frey was led or directed into working in this special and much needed field, and to her credit she has described the problems as well as the successes of her work.

The first chapter is an excellent introduction to the invisible world and the problems faced by the person carrying out a releasement. It also clearly defines terms such as “spirit,” “entity,” “personality,” soul,” “consciousness,” “psyche,” etc., and from all the evidence we have, she describes the experience of the soul when it leaves the physical body.

Lost souls or “wanderers” are graphically described in this first chapter, as are their interaction with living individuals. They are the energies which affect living people either mildly, called “shadowing,” or when there is harassment, called “oppression,” and then “obsession,” a stronger intrusion of the entity in which the victim is confused and bewildered. The most invasive intrusion by an entity is called “possession,” in which the entity takes complete control of the individual. Dr. Ireland-Frey describes these various forms of intrusion in the first chapter, and deals with them in considerable detail in case histories in later chapters.

There are many different conditions which attract invasion by discarnate spirits. These are well enumerated in this first chapter. Many souls do not know they are dead and they seek desperately for help and a safe place to be. Some seek the light and are soon taken care of by the light beings. Some who have been smokers and drinkers are attracted to individuals who use these substances. People who have weak auras are easy subjects for invasion. Living people who resemble the discarnate entity in some say also invite invasion. An angry soul will often attach to an angry individual.

On the positive side, an entity may be attracted to a living person they admire, or to a soul with whom they have had a relationship in a former incarnation. People who work in the health professions are particularly vulnerable, states Dr. Ireland-Frey, because they are caring people and souls feel safe with them.

Chapter One closes with advice on how to prevent obsession and introduces the topic of how to get rid of an entity attachment. Meditation and prayer are suggested, but Dr. Ireland-Frey defers further discussion until Chapter Ten, where the topic is thoroughly covered. Dr. Ireland-Frey suggests that anyone can do releasements and gives very specific details outlining the procedures, including the problems one faces in dealing with this phenomenon.

Dr. Ireland-Frey has included a very interesting aspect of the energy field, one not always or directly associated with releasement therapy. There has been much speculation about the effects of organ transplants on the recipients. Many believe that the energy of the donor is somehow transferred to the recipient when physical organs are transplanted. There seems to be rather convincing evidence that this theory has validity. Dr. Ireland-Frey addresses this issue and gives a possible explanation, that rather than just an energy form going with the transplanted organ, the original owner of the organ stays with it and becomes an obsessing entity to the recipient.

There is an interesting chapter on minor dark entities, the variety that haunts houses, and frequently annoy or frighten individuals. In this chapter Dr. Ireland-Frey introduces remote releasement. I know from personal experience that this form of releasement is possible. Many years ago, when I first became interested in the paranormal field, a friend of mine was superintendent in a Los Angeles elementary school. She called me one day and asked for advice and help. She had a pupil who was uncontrollable at home and in the classroom; he had been expelled. I was doing research at the time with a highly accomplished psychic who was also a doctor. When I asked her in a trance to look into this problem, she at once diagnosed him as being possessed. To my surprise she said confidently that she could and would take care of it. Two days later the superintendent called to tell me that the problem was solved.

There are many books currently being published about possession and hauntings. There is a heightened interest in this field and the friends I know who investigate haunted houses and work with cases of possession are in constant demand from people who are experiencing these problems. Dr. Ireland-Frey’s book is not only timely, but it covers the field of spirit releasement more extensively than most books on the subject. In addition it is fascinating reading, largely because of the many case histories she provides. If you have any interest in this field, you will include this book on your reading list.

Old Souls: The Scientific Evidence for Past Lives, by Tom Shroder