NEW MEDIA. Despite the Angels

Home/Book Review/NEW MEDIA. Despite the Angels

by Madeline A. Stringer 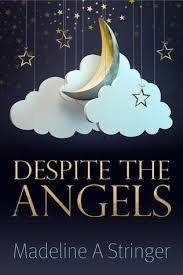 Have you ever felt you know someone already, even though you only just met? Maybe you knew them in another life. Lucy and David, who live in modern Dublin (Ireland), first knew each other in ancient Crete. They had a baby girl, but disaster struck, and their guardian angels have been trying to reunite the little family for 4,000 years.
Despite the angels’ attempts to be understood, humans often do not hear, and can unwittingly waste whole lifetimes. Now in Dublin things are still not going to plan. Lucy is too young, and David is marrying someone else. Angels are optimists, so they are re-organising, but humans must listen to their angels. This is a fun story about how it may be for the spirit guides who have the job of looking after us all. The guides (‘angels’) are the main characters in the story, and we follow their frustrations, innocence and fallibility as the humans carry on with their haphazard decisions. There are three historical pieces where we see the characters in their past lives together. These have been described as “seamless and increasing empathy for the characters.”

The book has been well received and reviewed positively online. Comments include:

“It is well written and incredibly enjoyable and combines all the elements I look for in a good book – romance, tragedy, humour, suspense and excitement.”
“I couldn’t put it down.” “A witty and engaging book.”

Regression therapists might like to recommend this book to the sceptical, even though real guides are more effective than these ones; or at least we hope so.
Although some who read it will be encouraged to investigate the idea further, this story can and has also been enjoyed simply as a piece of fiction.
Despite the Angels can be found on Amazon at http://authl.it/h8 or by looking up its title or the author’s name. It is available for download or as a paperback.

The Roads of Lives: Essays on Regression Therapy by Pavel Gyngazov