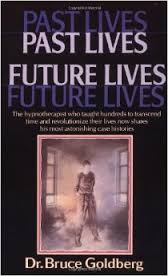 This book has been in print and available to the general reader for over a decade. In an era of “today’s best seller and tomorrow’s marked down budget book” this, of itself, is no small accomplishment. In the opening lines in the introduction the author states:

The purpose of Past Lives, Future Lives is to present the idea of reincarnation and karma to the reader in an attempt to explain why we are here and how we can all better ourselves.

However, when reading this book, one quickly gains the understanding that Goldberg is asking—no, actually telling—readers to extend and expand their concepts of reincarnation, other times and other lives, and similar phenomena (already a “stretch” for many readers) well beyond those generally accepted. This is not to say that Goldberg is wrong, only that he presents as “truths” a number of ideas which need to be thought about.

The author’s presentation of material and case studies dealing with past lives and reincarnation is pretty straightforward and would probably find little argument among practitioners of PLT. Goldberg devotes a chapter to “document the proof” of reincarnation and cites examples of many well-known researchers and writers including Edgar Cayce and Ian Stevenson, among others. He also presents some of his own case studies as examples. In reviewing this material one must keep in mind that this book was written for the general public, not specialists in the field. Therefore, the “proof” and “documentation,” while sparse by academic standards, is probably adequate to satisfy the needs of the general reader. Indeed, despite the focus on some controversial and difficult-to-understand concepts, the book is quite “readable.”

Dr. Goldberg is a frequent guest on talk shows where he presents his arguments in a rapid and forceful manner which is reflected in his writing. Indeed, reading the text one can hear his voice. Unfortunately—at least for this reviewer—this dynamic tone was sometimes a bit irritating. The author seemed to have a tendency to present his materials in an “I am the expert and what I say is absolute gospel” manner. This, in turn, may tempt the general reader to accept the author’s theories and speculations as “facts.” Laudably, however, in chapter six, he admits that he doesn’t have all the answers: “Until this field is thoroughly documented, I, myself, have more questions than answers.”

It is, however, when Goldberg begins to move the reader into the area of quantum physics and the concept of progression that one needs to take the materials in small bites and chew thoroughly. Not that the concept of “I am living now, I have lived before, and I will live again” is so startling, but when it is coupled with the quantum physics theory that all time—past, present, and future—exists simultaneously, then it presents something new. For most readers, this may be a difficult concept to understand.

Goldberg bases much of his argument upon the quantum physic theories and writings of Fred Wolf and others. He then gives some examples of case studies in which he has used progression to support the theory. Transcripts and summaries of several of these sessions are presented in the book. Of particular interest to the reviewer was chapter 15. In 1981, Goldberg was asked to conduct a series of progressions. The subject, a TV newsman, was asked to move forward in time one week and “read” either the newsroom assignment board or the actual script of the day’s news. Transcripts of the sessions and a summary chart of the results seem to lend support to Goldberg’s theories but as he, himself, writes “These hits (correct predictions of events) don’t prove (Goldberg’s emphasis) progression but, in my opinion, they lend significant credence to the theory.”

Taken in total, this book should be considered a “must read” for those interested in our field. Not because one will agree with everything which has been presented or because it was so scholarly or brilliantly written or that the author has all the answers, but rather because he has looked at some things and has started to ask some questions—and, perhaps most of all, because he was one of the first to do so. It is only by questioning and being willing to consider the implications of the answers received that we expand our knowledge and understanding.

Voices From the Womb by Michael Gabriel, M.A. with Marie Gabriel