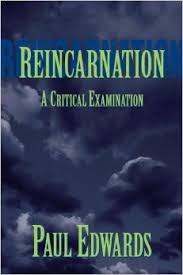 In his Introduction, Edwards states that “The belief in Reincarnation and Karma has been steadily gaining support in recent decades,” and therefore, “There is an urgent need for a comprehensive and systematic evaluation” of these doctrines. In spite of his opinion that the beliefs in these doctrines are “one aspect of the tide of irrationalism that has been flooding the Western World, especially the United States,” Edwards assures us that in making his critical examination of these doctrines, he has “attempted to state, fairly and fully, all the main arguments offered in support of reincarnation and Karma.”

One would anticipate that a “critical examination” of such doctrines would involve seeking out examples of the best, rather than the dubious. This would seem to include at a minimum, an examination of recent well-documented cases of xenoglossy (the ability of a person to speak in a language to which he or she had not previously been exposed in this lifetime), and those cases where the existence of the past life to which the subject regressed has been well verified. However, the bulk of this book is devoted to the recitation of anomalies; that is, odd, peculiar, or strange stories which Edwards offers as stereotypical of those who subscribe to the possibility of past lives.

Illustrative of the anomalies recounted by Edwards in his “critical examination” are the claimed experiences of persons such as Dr. Stanislav Grof, Dr. Elisabeth Kubler-Ross, Dr. Arthur Ritchie, and Dr. Sir Alexander Cannon.

Grof administered the hallucinate LSD to subjects, after which he claimed they experienced “instant intuitive information about any aspect of the universe in the present, past, and future.” They also identified “with the consciousness of animals, plants, or inorganic objects and processes.”

Kubler-Ross, well respected for her work with the dying, has reported that she has received visits from dead patients who “materialize” before her, and that she has become an “astral traveler.” According to Edwards, Kubler-Ross has claimed that she travels through space at the speed of light, has contact with spiritual beings, and has experienced the death of every one of the thousands of patients that she has seen. Edwards reports that Kubler-Ross claims that she experienced literally “the bleeding and the pain and the agony and the cramps and incredible pains and tears and loneliness and isolation – every negative aspect of every patient’s death.”

Ritchie, after being pronounced dead and before being resuscitated, apparently claimed that he flew to hell where he “witnessed the dreadful tortures suffered by suicides, alcoholics, violently angry types, and sexual perverts.” He also visited heaven where he was shown “astro-laboratories” in which scientists were engaged in experiments.

Cannon reportedly claimed that while traveling in Tibet, he, along with his porter and luggage, were levitated over a chasm.

In his “critical examination,” Edwards discusses the problem of what vehicle, if any, would survive physical death and transport memories of past lives to the present. But he concludes that whatever that vehicle is, it is the same as the “astral bodies” of those who claim to venture outside of their bodies while living. Again, facing the choice of whether to search out the best or the dubious, to illustrate the astral body concept he cites the 19th-century story of Mr. and Mrs. Wilnot. Mr. Wilnot encountered a great storm while at sea, and while on that trip, he was visited and embraced by Mrs. Wilnot. Mrs. Wilnot was in the United States at that time, and she claimed that her astral body had traveled to and visited with Mr. Wilnot.

Paradoxically, in his examination of the doctrine of Karma, which he considers the doctrine that everything good that happens to a person is a reward for good deeds in a past life, and everything bad is punishment for evil deeds, Edwards presents reasonable and well-thought out conclusions. He cites, as examples, that of a plane crash killing all on board, an earthquake killing many, the holocaust, the recent Bosnian “ethnic cleansing,” and other tragedies involving large numbers of people. He asks the old question: Is it reasonable to suppose that all those who perish in such tragedies deserve exactly the same treatment because of their past-life deeds? He observes that Karma would indicate that no matter whether we help the suffering or not, the outcome will be just, in the sense that every human being will be getting exactly – no more and no less – what he deserves.

Throughout the book, Edwards refers to the opinions on reincarnation from many philosophers from the Western World, such as Plato, Goethe, Schopenhauer, Hume, Santayana, Huxley, and many others, with whom he appears to have a good acquaintance. These opinions, although interesting, would seem to have little relevance to a “critical examination” of the past-life phenomenon, particularly the recently reported, well-documented cases, none of which he examines or even acknowledges.

In reviewing a few of the cases reported by Dr. Ian Stevenson, who is one of the best-respected researchers of the past-life phenomenon, Edwards states “Stevenson is generally distrustful of hypnotic regressions and all the cases he has studied are of the spontaneous variety.” This, of course, is simply not true.

Even the most rudimentary research, had it been performed, would have disclosed Stevenson’s Jensen case reported in 1974 and the Gretchen case in 1976. The Jensen and Gretchen cases both involved the use of hypnotic regressions. Both cases were excellent examples of responsive xenoglossy, that is, the subjects’ ability to respond intelligently to questions in a language with which the subjects had had no previous contact in their present lives. Nevertheless, Edwards dismisses Stevenson as a person who “evidently lives in a cloud-cuckoo-land.” In addition, more thorough research would have encountered the Antonia case reported in 1990 by Linda Tarazi, and the Johnson case reported by Rick Brown in 1991. In both cases, the remembered past lives were well researched and verified.

Edwards states that the weightiest argument against reincarnation is based on the dependence of consciousness on the body, and more particularly on the brain. After a discussion of the views of Wilder Penfield, C.J. Ducasse, Locke, Hume and many others, he strongly defends the hypothesis that when the brain dies, all consciousness also dies.

This reviewer would maintain that skepticism of the right kind is a healthy and necessary thing. Professor John Beloff, a psychologist at the University of Edinburgh, classifies skepticism as either “absolute skepticism” or “de facto skepticism.” For an absolute skeptic, he states, evidence is simply irrelevant. An absolute skeptic would nullify any evidence by “invoking some general principle, such as consistency with known physical laws…or some other cherished criterion.” In other words, dogmatism.

A de facto skeptic is one with an open mind but who demands stronger evidence than anything that has so far been produced. In view of the many recent, well-documented cases of xenoglossy and verified remembered past lives, a critical examination of the doctrines of reincarnation and Karma by a de facto skeptic would be welcome. Unfortunately, absolute skepticism seems to be the theme in this book.