Return to Life: Extraordinary Cases of Children Who Remember Past Lives by Jim B. Tucker, M.D.

Home/Book Review/Return to Life: Extraordinary Cases of Children Who Remember Past Lives by Jim B. Tucker, M.D. 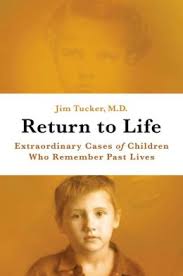 Professor Tucker has taken us by surprise. This time he wrote a book that will be appealing to everybody, from lay persons to academics. Unlike his predecessor, Ian Stevenson at the University of Virginia, who meticulously wrote his books for the academia as if he were referring to a judicial body, Dr. Tucker writes with patience and wisdom. Without denying the importance of details, he goes into the essence of the stories and provides us with plenty of evidential cases that all make a point. There is much more out there than modern science can grasp with its materialistic tools. It is by focusing on this exceptional phenomenon of children’s recollections of past lives that we can see how the limited prism of our reductionist scientific paradigm is such a distorted view of reality.
It has been a long time since I read his first book Life before Life. It was a great effort to make deaf ears listen this time. However, his current book is wiser and touches issues that had not been addressed in the earlier one. Together, they make great reading, but both can stand on their own as well.
I have to thank Dr. Tucker for the courage to write his second chapter. In it, issues that may be considered taboo by the majority of Westerners will bend your mind. But, believe me, they are phenomena that exist and have to be dealt with if we really want to study the cosmos.
Dr. Tucker also presents very strong, solved cases (as they are said to be when children’s memories are finally verified) and weaker unsolved cases. He also provides us with all the elements that characteristically constitute a case: the physical, emotional, psychological aspects of each and every child who has these recollections. In this he does a great job.
Finally, he has no choice but to present some physics in order to show the reader that there is plenty of room for such phenomena in quantum physics. He shows with clarity that quantum mechanics applies to the macro-world as well and that if the phenomena he is reporting are seen from a quantum perspective they can make sense. He extends his argument to the fact that our
four-dimensional world may be a fallacy and that the time continuum as we perceive it may not be linear as past, present, future.
His final allegory of consciousness being equated to dream life is a remarkable example of how everything could fit into a picture and makes us realize that we are all a tiny little part of a much larger picture, that of the Ultimate Source. He clearly shows us how we all create our own afterlife conditions in the here and now.
An inspired book, a “must read,” a great present to a friend. It should not only be read by psychiatrists, psychologists, or psychotherapists (traditional or alternative); it should be read by all people who want to make sense of the world that surrounds us and find meaning into it.