Home/Book Review/The Search for Grace: A Documented Case of Murder and Reincarnation by Bruce Goldberg 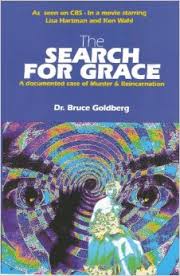 It may be reasonably assumed that Dr. Goldberg, through his writings, TV appearances, and conference presentations, is no stranger to our readers. In The Search for Grace, he presents a fascinating case study involving a patient whom Goldberg eventually regressed to a total of 46 past lifetimes. In an amazing example of karmic reoccurring connections, it was discovered that she (a female in her present life) had been murdered in 20 of these past lives by the same man with whom she presently found herself involved in yet another abusive relationship.

While cases involving the “connectedness” of two individuals in multiple lifetimes are a phenomenon well-known to past-life therapists, the scope of this patient’s repetitive pattern spanning 46 lifetimes is both unusual and significant. What is even more significant for those for whom validation and “proof” are important is the rather extensive documentation which Goldberg presents to the reader. This is particularly true of the most recent past lifetime of the patient, whom he calls “Ivy,” in which she, as Grace Doze, was murdered in 1927. The historical accuracy of the information presented by Goldberg’s patient during the regression to her life as Grace Doze was well-documented by researching newspapers as well as other public and police records of the time.

Much of the book is a collection of transcriptions of regression sessions of “Ivy” to previous lifetimes and the common pattern of abusive and deadly associations with the same man over and over again. Interspersed in the transcripts are Goldberg’s comments and psychological interpretations of the events (in addition to his doctorate in dentistry, he also has a Master’s in psychology), as well as references to the works of historians writing about the times in which these past lives were occurring. Goldberg also makes extensive reference to the theories of Wolf, Toben, and others concerning quantum physics, which he sees as a logical frame of reference from which to view the past life experience. Indeed, Goldberg devotes quite a bit of space to explaining these theories. He also presents the reader with some of the concepts of transpersonal psychology (Wilber, Bugental, et al) and, laudably, devotes an appendix to the topics of self-hypnosis and seeking a hypnotherapist for regression work. Lamentably, he fails to mention APRT as a resource for this purpose.

The book, because of its scope and the manner in which it was written, should be considered as appropriate for both the interested lay person and the professional alike. It must also be stated that, as one who in the past has been somewhat critical of Goldberg’s tendency to present material with a “this-is-what-I-think-and-therefore-that’s-the-way-it-is” tone, I now note with pleasure that in this book he has demonstrated a greater effort to substantiate his own ideas and opinions with documentation and references to the works of others. And it is perhaps in providing the reader with this kind of material that he not only strengthens his case, but also makes a valuable contribution to our ongoing efforts to validate PLT/PLR as a legitimate field.

Past-Life Therapy: The State of the Art by Rabia Lynn Clark, Ph.D.