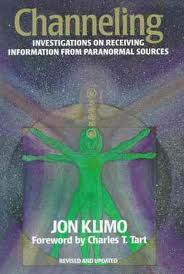 Dr. Jon Klimo’s book Channeling tells us what we’ve always wanted to know about channeling but didn’t know where to go to find out! It is a welcome, well-researched look at this popular psychic phenomenon. An educational and counseling psychologist, Klimo presents a wealth of material in an organized and reasoned manner, thereby making his book especially valuable for teachers, therapists, and other professionals who may remain skeptical about the validity of information coming from self-styled psychic “channels.” At the same time, his easy-to-read style and frequent use of interviews and excerpts from channeled sources makes Channeling  accessible to anyone interested in knowing more about this fascinating subject.

Dr. Klimo begins with a very broad-based definition of his subject:

Channeling is the communication of information to or through a physically embodied human being from a source that is said to exist on some other level or dimension of reality than the physical as we know it, and that is not from the normal mind (or self) of the channel. (p. 2)

Thus defined, it is clear that Klimo considers channeling to be a human ability that has appeared throughout history from the utterances of the Oracle at Delphi and the Biblical prophets to the latest predictions of today’s psychic superstars like “Ramtha” or “Lazaris.” Concentrating at first on the personalities of the channels themselves, Klimo intrigues us with thumbnail sketches of history’s best-known psychics, prophets, and seers. His outstanding footnotes and well-culled bibliography make the book an extraordinary research tool. Even though at times one wishes for more details about the contexts in which some of these famous channels have operated, the scope of this subject is such that no single book could hope to include everything. It is a tribute to his editorial skill that Klimo leaves us hungry to know more about these unusual people. His chapter on “Who Does it?” where he presents a psychological portrait of the kind of individual who seeks to channel is especially noteworthy.

In the second section of Channeling, Dr. Klimo delves into the reams of channeled material that are currently available either in print or on cassettes. Although he carefully avoids judging specific channeled sources, he offers succinct guidelines by which one can interpret these messages and their significance. He also provides the most-complete listing of the various types of channeling techniques, sources, and uses I have ever seen. I was fascinated to read his catalogue of channeled sources (i.e., the kinds of entities purporting to speak through human mediums) and discover that everyone from God and Jesus Christ to extraterrestrials, group souls, and the “elementals” from plants and minerals have thus voiced their opinion at one time or another. Methods of channeling described include full-trance sleep and dream channeling, waking-trance, intuition or inspiration, and “physical channeling” (table tipping etc.).

After thoroughly describing the many kinds of channeled material available, Dr. Klimo investigates potential explanations for channeling. He focuses first on what psychologists have said and then summarizes recent discoveries in physics and biology. These, he feels, tend to support a holistic view of our universe and how the human brain/mind functions. His section on psychological explanations is a useful summary of both traditional interpretations such as “compensation” or “delusion” to more recent transpersonal views that concentrate on evaluating the experience by the value of the information received, both to the channel and to his or her audience. I noted that on page 224 be even mentions APRT when discussing “Hypnotic Age Regression and Reincarnation.”

Dr. Klimo also touches on the LSD research of Stan Grof, Karl Pribram’s theory of the holographic brain, and biologist Rupert Sheldrake’s revolutionary concept of morphogenetic fields. He ends this section with a personal metaphor defining our individual selves as interdependent parts of an overall single Universal Mind or Being. Channeling then becomes “the growing awareness of any part of the one Being that it can access any of the rest of itself” (p. 296). It is thus “part of a spectrum of abilities we all may possess” (p. 320).

Having concluded that everyone possesses at least rudimentary channeling capabilities, Klimo ends his 343-page study with a chapter, appropriately entitled “Your Turn.” In it he invites readers to explore their own channeling potential further. Within his rather broad definition, he makes it clear that “opening to channel” does not necessarily mean falling into full trance or becoming another public figure like “Mafu” or “Lazaris.” It may simply mean getting in touch with one’s own inner wisdom, listening more to that “still, small voice” that everyone has experienced at one time or another. He also presents a few of the standard warnings about insuring proper personal preparation before attempting contact with other levels of reality. In one of the few criticisms I have of this book, I do think this section could have been somewhat more thorough, drawing, for example, on Hugh Lynn Cayce’s book Venture Inward, which gives explicit advice about how and when to use meditation, hypnosis, automatic writing, Ouija, and mediumship or channeling. Having a clear spiritual purpose and guidance is essential to avoiding psychological pitfalls.

Dr. Klimo ends by stating that the ultimate benefit of channeling is self empowerment. Far from representing an abdication of self-responsibility, as some critics assert, if properly used it can open one to more self-awareness, both as a spiritual being and as part of a greater, living Whole. Looked at in this light, Channeling follows in the same tradition as the man from Galilee who told his followers to “Seek first the kingdom of Heaven within, and everything else will be added.” Still, when applying this advice, we must not forget the additional injunction to use such powers wisely, remembering that the true “fruits of the Spirit” are unconditional love, patience, and humility.