The Children That Time Forgot By Peter and Mary Harrison 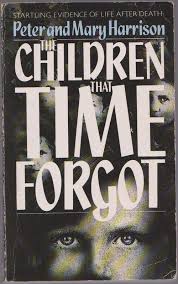 The Children That Time Forgot is one of the few collections of documented incidents of spontaneous past-life recall in children. Peter and Mary Harrison, of England, collected 29 cases of spontaneous past-life recall derived from interviews with the parents of British children. This book can be compared to the work of Dr. Ian Stevenson, who has done extensive research and writes about past-life memories in children. The Harrisons’ book is significant because the cases are exclusively from a Judeo-Christian culture where reincarnation is a less well accepted idea; Dr. Stevenson finds most of his cases in Eastern cultures where the concept of reincarnation is more prevalent.

At the time of their children’s recall, none of the parents interviewed by the Harrisons believed in reincarnation. In almost all cases, the parents were bewildered or amused when their barely verbal children began relating stories of their past lives, and dismissed their attempts at communication as babbling and fantasy. Yet, in every case, the children persisted in telling their stories and adhered to the same details. Their persistence and conviction caused their skeptical parents to listen.

Several of the young children claimed to be deceased relatives. They shocked their parents with details about these former lives, details that they could not possibly have learned in their present lives. They knew exact locations of streets and buildings that no longer existed, gave accounts of conversations and events from their former lifetimes that were later confirmed by surviving relatives, and exhibited mannerisms and behavior that matched those of the deceased relative. The evidence convinced the surviving relatives that these children could only be the reincarnation of the deceased relatives.

Most of the book is devoted to descriptive accounts of the children’s experiences. One boy, named Carl, began making accurate drawings of German army badges when he was first learning to draw. He told his parents about his life as a German pilot in World War II and his death when his airplane crashed into a building. More details emerged as he became more verbal, and by the age of five he had drawn the control panel of the cockpit of his plane in correct detail. Carl is described by his parents as being a perfectionist to an unusual extent for a child of his age. He is precise in his manner and is particular about his appearance. His amused parents believe that these traits were carried over from his life as a disciplined German soldier.

One of the most interesting accounts is that of a young girl, Nicola, who remembers being a small boy killed while playing on railway tracks. Nicola remembered family names and the location of her former life. Her parents took her to the site and validated the names and locations from historical records. A little later, Nicola was watching a television movie and saw a train thundering down the tracks. She became hysterical, gasped for air and threw her arms wildly in the air. Her parents were not able to console her, and the hysteria stopped only after they turned off the television. The parents were convinced that the television images caused Nicola to re-live the event and re-experience the emotions. After this catharsis, the child was left with only pleasant memories of a pet dog in that former life.

Another case, that of two-year-old Dominic, demonstrates how reincarnational memory can be expressed through the physical body, emotions, and behavior. Dominic was born with a mark on his thigh that resembled a stab scar. He was also terrified of water and had such a dread of bathing that his mother resorted to sponge baths. When he was two years old, he pointed to the birthmark and told his astonished parents that when he was a sailor he had been stabbed at that point on his leg and had fallen into the water and drowned. Unfortunately, the Harrisons give no follow-up to that story, which left this reviewer wondering if Dominic’s fear of water diminished after he was able to tell his story.

These fascinating accounts in The Children That Time Forgot conform to what past-life therapists have found to be true of reincarnational patterns and the states between lives. Several children explained to their parents what it is like to be between lives and described the process of selecting parents and situations in which to be incarnated. The children describe the place between lives as paradisiacal, a place of all-encompassing love and higher learning. They experienced their sojourn there as children who were tended by adult guardians and radiant beings, and believed that they would return to this place after their earthly life.

Common elements in these stories also support Dr. Stevenson’s findings, as in the case of Dominic, above, who had a birthmark on his leg in the same spot where he was injured in a past life. Most spontaneous recall occurs when a child is one to three years of age. By the time children reach school age, at about five to eight, the memories fade. As one two-year-old in the book put it, “Of course you remembered [your past lives] when you were a baby, but you’ve forgotten it all now you’re old.”

The Harrisons tell these stories as if you were joining them for afternoon tea in their parlor. The conversational style, sprinkled generously with English idioms, makes enjoyable reading. As with parlor chat, however, they get carried away and digress into superfluous, irrelevant discussions of British history. This style may make the information more accessible to the general British public, but the reviewer wonders if it may have the effect of somewhat undermining the credibility of the material for more serious readers.

The book has other weaknesses, too. The authors present confusing and contradictory arguments on the value of hypnotherapy in accessing past-life material. Their opinion is that the results of hypnosis are unreliable and may be contrived by the subject. Yet they go on to quote doctors and other professionals who have had success using these very techniques therapeutically. They also digress to discuss the implications of reincarnation on the subject of abortion. The book would have been stronger if they had left these sections out.

The real strength of the book is in the accounts themselves — the children’s words and the reactions of their parents. The Harrisons present a convincing case that young children do remember their previous lives and that we should listen carefully to them. Children, they explain, offer us a wonderful opportunity to examine reincarnational memory because they have little experience and exposure to information that could adulterate the memories.

As parents and past-life therapists, if we understand that young children do access these memories, we can look to them for insight into the workings of reincarnational imprinting and its effect on behavioral, emotional, and physical patterns. If children’s memories are met with acceptance and understanding, rather than disbelief and denial, how much more can they teach us?