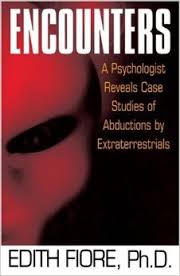 Dr. Edith Fiore’s latest book, Encounters, is a superb report on a highly controversial subject. Coming from a background of traditional psychotherapy, she discovered past-life therapy only a few years ago and wrote You Have Been Here Before, an excellent volume delineating the value of PLT as a therapeutic tool. Next, confronted by evidence of psychic attack in many of her clients, she wrote The Unquiet Dead, a fascinating and altogether plausible account of this universal phenomenon.

One might almost believe that Destiny had a hand on this courageous lady’s shoulder, knowing that she would share these discoveries regardless of how unorthodox or debatable they might be. When Dr. Fiore discovered that some of her clients were apparently having encounters with extraterrestrial beings, she again accepted the challenge, first investigating and then reporting her findings.

Encounters is a verbatim account, in dialogue, of 14 of the cases the author worked with in her office. Her selection is varied enough to give the reader a broad overview of the characteristics and purposes of the extraterrestrials. Her cases also represent a good cross section of the client population, with a balance of men and women, and for the most part, individuals with quite diversified emotional problems resulting from their encounters.

Dr. Fiore introduces the service-oriented aspect of the ET’s, providing examples of clients with serious physical problems that were healed by the abductors—with complete success in some cases and improved health in others. There are also indications that ET’s are interested in the role sex plays among humans, and strong evidence that they are experimenting with crossbreeding.

Two common patterns emerge from these case reports: All abductees were given instructions to forget everything that had happened to them during the encounters, and all felt irresistibly drawn up into some sort of light energy which they could neither describe nor explain, but which totally controlled them.

One of the primary values of hypnosis is demonstrated here: Whatever has been put into the mind apparently remains there—and can be recalled under hypnosis. Dr. Fiore used hypnosis to tap into the purported experiences of her clients.

Her probing questions elicited considerable information about the physical characteristics of ET’s, which seem to show considerable diversity. Some have four digits, rather than the usual five on humans. Some have only holes for nostrils. Most of them have ears that are very small and close to the head. The eyes vary in size and color; they are round or slanting and come to a point on both sides. The face is egg-shaped, with the lower half very narrow.

Size varies considerably; a few are very tall, but most of them are rather small and some are very small and petite. Both sexes were encountered by Dr. Fiore’s clients.

While a few of the encounters were physically painful, and the ET’s involved might be termed unfeeling, for the most part the captors were reassuring and considerate. They continually stated that they would not harm their subjects and that everything would be all right. In most cases they answered questions and explained what they were doing. However, communication was usually telepathic; their lips seldom seemed to move in speech.

Dr. Fiore lists the 10 most common signs of abductions. If you have experienced one or more of these symptoms, the chances are that you have buried memories of a close encounter with an ET: (1) inability to account for a period of time; (2) persistent nightmares and/or dreams of UFO’s or ET’s; (3) sleep disorders; (4) unusual body sensations on waking; (5) mysterious marks on your body; (6) feelings of being monitored, watched and/or communicated with; (7) repeated sightings of UFO’s; (8) vague recollections of a close encounter; (9) unexplained healing of ailments or afflictions, and (10) feelings of fear or anxiety about UFO’s or ET’s.

Apparently many people are suffering vague and unidentifiable fears and emotional disturbances which traditional psychotherapy cannot alleviate. Dr. Fiore has opened a door through which we may all pass to help many of our clients who cannot respond to orthodox therapy. Her pioneering work is certainly a major step in expanding the psychological services available to a public seeking help for emotional problems.

As one reads this book, the desire for information about the modus operandi of the abductors grows stronger and persists to the end. But that is no fault of the author’s; continually, with client after client, she asked for just that information. It was not forthcoming, except in a vague sort of way.

The ET’s seem to have the mind power to manipulate energy, so that what seems miraculous to us is common knowledge and practice for them. Manipulating time, for example. An earthling might be missing from a bedroom for a few minutes, yet have an experience that would consume a number of hours of earth time. Is the physical body teleported to another space and place, or is it just the astral form that is transported? This is discussed and in some cases specified, but the reader would like to have more clarification.

At the end of the book Dr. Fiore lists 50 questions for anyone who believes he or she may have had an encounter with ET’s. These can be answered without help from anyone and can relieve vague fears or uncertainties.

The appendix lists organizations to which one can write for more information on conferences, channeling space people, available literature, and journals. There is also a list of hypnotherapists who work with abductees or contactees. A two-page bibliography completes this comprehensive and truly fascinating book.

Dr. Fiore points out that before lasers came into use on earth, the space people were using them for healing on abductees. Wouldn’t it be interesting, she speculates, if many of our modern developments in medicine, technology, and space exploration prove to be the result of direct help from the space people through our top scientists?

I am sure many readers will concur with her closing statement: “I feel that the discovery of visits to our planet Earth by beings from other worlds and their interactions with humans is the most exciting and significant happening of the 20th century.”