Through My Looking Glass: a Personal Journey into Vaster States of Awareness (Book 1) by Winafred Lucas

Home Book Review Through My Looking Glass: a Personal Journey into Vaster States of Awareness (Book 1) by Winafred Lucas 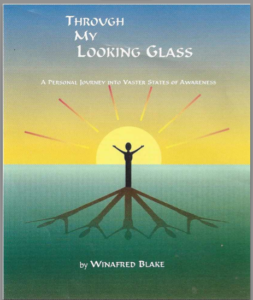 When Dr. Winafred Blake Lucas began to write her three-volume memoir she fully intended to complete it during her lifetime. She employed a secretary in California and this copyeditor in New England, both of whom had worked closely with her for years.

With the Internet not yet in widespread use, Winafred’s chapters crisscrossed the country by mail as they underwent repeated editing and revision. Photocopies of all materials provided a back-up in New England, lest any be lost in the mail.

Once her second volume had reached completion she visited here for several days. We kept ourselves warm by the woodstove in the basement as we moved through each chapter of her proposed third volume. When she returned to California, Winafred continued to revise her work, often moving entire sections of text in and out of their original volumes.

Slowly the culmination of her life work began to come together. However, Winafred’s physical energy waned. With hours now available to sit and think each day, she gained deeper insights into matters of great importance to her. Wanting to capture these new thoughts, she revised and reorganized even further, never satisfied enough to view this massive work as complete.

Then on Christmas Day of 2006, at the age of 95, Winafred Blake Lucas slipped into the realm that follows physical life.

A few years after her passing, a phone call came from one of her former colleagues. This colleague had been approached by Winafred’s family, who sought a way to publish the memoir that Winafred had tried to finish. Collette Fethke, Winafred’s long-time secretary, had since died, and Winafred’s computer disks proved impossible to read.

What remained in my office in New England was a haphazard accumulation of versions of marked-up chapters. Some lay in boxes, some in file folders, others under dusty piles of notebooks. Clearly the only hope of moving this memoir toward publication lay in sorting and piecing together these odd copies, then typing the entire three volumes.

The resulting work, prepared with the encouragement and proofreading skills of Winafred’s former colleague who wished to remain anonymous, follows as closely as possible Winafred’s ultimate thinking.

This comprehensive memoir can now follow its own path, touch its own readers, and contribute what it will to all that is yet to come.