The author calls to the therapists/readers attention the importance of history and expanded thought in the therapeutic processes. He presents a series of timely suggestions based on research, experience and historical information encouraging the expansion of transpersonal regression therapy.

“For in the past, nothing is irretrievably lost,
but everything irrevocably stored…”
Victor Frankl

The provocative information illustrated in this article distinctly alludes to parallels in ancient healing knowledge and techniques that have existed for thousands of years. Perhaps our present day knowledge and healings, (physical, mental, emotional and spiritual) are an attempt at playing catch-up with the timeless wisdom, which is limited by ego based observations, based on materialism and our five senses, of the great truths that extend beyond three dimensional thinking. There are many diverse views and techniques in the healing professions. I believe everyone has a piece of the whole. Here are some successful insights I’ve gained over the past 30+ years, for what they’re worth.

As a successful hypnotherapist, I have asked what are we really doing with the clients and how is it accomplished? What is really happening that helps achieve successful transitions and transformation in an accelerated time frame and at what levels (physical, mental, emotional and spiritual) within those clients?

Basic information from the quantum sciences establishes that we live in a multidimensional world. Common sense would dictate that we cannot solve multi dimensional issues, by using a three-dimensional mentality.

Our successes today have evolved from the wisdom and knowledge in ancient esoteric teachings. What are we doing? I believe we are shifting physical, mental and spiritual energies by altering an individuals’ electromagnetic fields, modifying biochemical balances and reprogramming the body’s DNA. In addition, we are tapping into or working beyond the multidimensional realities of the theoretical and quantum sciences to date.

Esoteric schools and spiritual masters have for centuries always known the human body was programmable by correct vibrational frequencies, shifts in language, intention and thoughts both voluntary and involuntary are able to accomplish this.

Tesla stated the greatest secrets of the universe are vibration and frequency. Bioenergetics (1960s) introduced the concept of invisible energy that communicates. Today the universe is known to be a live series of interwoven responsive energy systems which subtle, are interdependent and influence one another.

As hypnotherapists we may have little or no working knowledge of genetics, genetic codes or scientific programming techniques. DNA is that master control mechanism for each cell in the body. Each cell is whole and complete in itself. We are each an evolving cooperative consciousness community of approximately 50 trillion cells that can be accessed and directed at the cellular level. How? Basically through activating the correct vibration and frequency through voice and intent. Russian scientists experimentally have proven DNA responds to words and phrases, in short, language. This is why clairvoyance, intuition, spontaneous and remote healing, meditation, affirmations, attitude, and hypnosis all have such a strong influence on the body. Esoteric schools and spiritual masters have known this fact for centuries.

Scientists state 90% of our DNA is inactive. I believe, based on research, collaboration, experimentation and personal experiences, that through hypnotic regression process we are reactivating and reprogramming DNA and perhaps speeding up the evolutionary process!

Pythagoras (583-500 BC) considered the God-father of sound medicine, employed music and voice as a healing medicine. 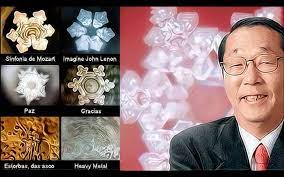 Dr. Masaru Emoto (Japan 2000s) photographed dynamic responses and influences of energy on water. His classic research used different genre of music, voice, intention, thoughts (written and voiced) directed toward water. After exposure to both positive and negative energies, Emoto froze the water and photographed ice shavings proving the ramifications energy has on water. His photos graphically and accurately display the harmonic balance in positive energy (frequencies) were more symmetrical and beautiful, versus the more disruptive chaos of negative energy (frequencies). Keep in mind our bodies are 70% water. Dr. Emoto gives photographic proof of the transformational power of thought and its redirection.

Scientific experimentation with plants in the 1960s, revealed similar findings: That plants are able and do respond to thoughts, they have feelings, and are able to monitor human and animal energy (frequencies). It seems they have the same innate abilities of both animals and humans, including sight and taste. Is it perhaps possible they are capable in their own unique way of thought? One can only wonder what their true potential is.

Our brain takes in approximately 400 billion bits of information every second, 24/7, from birth or before. Yet we are only aware of some two thousand bits per second. We possess approximately 100 billion neurons each capable of producing 1/10 volt of electricity. Our brain is capable at its max of about 10 billion volts of electricity, one very powerful force. If we harness and direct a small portion of our electrical potential towards physical intention, emotional, mental or spiritual healing we can expect miracles because our brains capacity is far beyond our wildest imagination and a definite force to be reckoned with. Even so, the brain is dwarfed by the power of the mind. The brain is the interconnect between the physical and spiritual realities.

Placed in a hypnotic sleep (1784), Victor, a French sheppard boy, displayed heightened intelligence and powers of clairvoyance. Other numerous European peasants (1820s) placed in this ‘somnambulistic state’ duplicated many of Victors achievements so successfully a commission was appointed to closely scrutinize and record and all claims. After several years (1831) their findings positively confirmed everything attributed to somnambulism. The medical academy of Paris protested against printing the final report, “… because if the facts presented were true, half of the physiological sciences would be destroyed.” Laws were quickly passed against somnambulists.  Orthodox medicine gained favor and somnambulism faded.

Clairvoyant medical diagnosis in America was successfully practiced for over 50 years by Andrew Jackson Davis (1826-1910). Known as the (Poughkeepsie Seer) he documented hundreds of cases and wrote several books on the subject.

The nineteen-seventies offered a plethora of contributions to transpersonal (spiritual) regression work. Including Near Death Experiences (NDE), Past Life Regression, Between Life information, Pre & Perinatal Regression, Earthbound Entities, E.T. Communication and much more. Multidimensional realms suggested by theoretical and quantum sciences, gave added depth to therapeutic approaches for those open to the challenge. All of this new (old) information emerged appearing fresh with its long historical lineage of centuries old esoteric teachings.

Emotions and traumas, it was discovered, could be carried over from past life experiences; pre and perinatal recall. Surprising information was even discovered from the in between life stages. External influences are another area that can affect us, for example attached earthbound entities that carry memories of their traumas with them. E.T. communication has had its impact on us as well: P.M.H Atwater reports 20% of NDE clients recall life on other planets. Edith Fiore writes of E.T.’s retiring to this planet. How many of these memories are encoded in the 90% inactive DNA is unknown. I maintain, even as individuals using self-hypnosis, we have the mental capability, potential and awareness to locate, identify, accelerate and resolve physical and spiritual issues at the DNA level.

Historically, progress has always been impeded by critics who fail to recognize successful alternative practices and techniques, regardless of any documented success. If any successful practices run contrary to established orthodox paradigms or beliefs, they are ignored or worse, denied as relevant. “ Belief is stronger than truth.” Socrates.

I believe the success, knowledge, and truth lies in transpersonal regression techniques laid out by the ancients. The foundation of emotional problems are created by our misinterpretation of event(s) that we experience.

I’m not out to change the world to my way of thinking. I like to share information that ideally provokes thought among intelligent individuals, and perhaps spark original experimentation for the furtherment of the healing arts. It is startling, how much valid information never gets out to the people for one reason or another.

“Truth passes through three stages.
First it is ridiculed.
Second it is violently opposed.
Third it is accepted as being self evident.”
Arthur Schopenhauer

Here are some simple, highly effective questions that work for me. The magic in regression work is the reorienting of perspective to past events for accelerated healing, both physical and spiritual. These events can be both internal and external.

These simple techniques, with a spirit of adventure, a dash of intuitiveness and requests for outside higher assistance will all aid in your progression toward becoming a more effective therapist. Every facet of our life including DNA is determined in part by our misperception of any event. The foundation of our problems are the emotions brought about by our interpretation (right or wrong) of any event and our individual misinterpretations, be it from the past, (real or imagined), in the present, or possibly in the future.

I would suggest successful therapy today, comes from not working harder, but thinking differently. By eliminating restricted thinking, we free ourselves from the habitual, and open the flood gates of unique potential.

Emoto, Masaru. The Secret of Water. Hillsboro, OR: Beyond Words Pub, 2006.

This was a project of the Parks Research and Educational Project. The goal, to give statistical validation of individual responsibility for programming physical illness and disease unconsciously. The project employed hypnosis to contact the subconscious mind in order to discover the psychosomatic origin and cause of the problem(s). A copy of the report is available.

Also study the work of Dr. Ed Matin at the Path Foundation on “cell command therapy.”

Fosar, Grazyna, and Franz Bludorf. “Scientists Prove DNA Can Be Reprogrammed By Words and Frequencies.” Wake Up Worlds: Information from a Another Perspective. N.p., n.d. Web. <wakeup-world.com/2011/07/12>.

Do you like this article ? You can visit the page of the Issue for more information. This article is on the Volume number: XXII and it is published at: 01-03-2014 You can also visit the author profile for the bio.