I left my island with its fog and trees, which go right down to the waters of Puget Sound, to come south in September to the APRT Annual Conference in sun-filled Sacramento. In looking over the possible workshops one stood out for me because of its title, “Creative Source,” my favorite words! In a group of about twenty-five participants I was one of three who volunteered to be subjects. Dr. Schubot, the workshop leader, used all three of us to demonstrate how the body is tuned to a Creative Source which knows the answers to questions asked, answers which would lead to our highest good. Answers bypass the conscious mind and are evidenced from the unconscious by the resistance (a “yes” answer) or lack of it (a “no” answer) to pressure on one’s arm. When he asked each of us if the highest good would be served by that person being used further in the workshop demonstration I was the one whose unconscious via my arm, gave a positive response.

When I was asked what I wanted to work on, I answered, “Anger, especially against leaders, mostly men!” I was surprised because in other past-life regressions I had dealt with a sense of loss.

My arm indicated that I had no fear of continuing if the audience would be accepting and not consider what I did a waste of time; always a concern of mine. Then everyone closed their eyes and at Dr. Schubot’s request beamed me love and acceptance. Someone said afterwards that there was the feeling of gossamer threads of love connecting all their heart chakras to mine, and this feeling of love and acceptance generated by the leader, characterized the entire experience and made it possible for me to let go completely and trust.

“Yes” and “no” answers from pressing my arm gradually elicited the information that the source of the anger stemmed back to the Holy Land at the time of Christ and was directly connected with the Crucifixion. I was a follower who was angry at Christ for leaving and deserting me when I loved him so much. As I recalled this event, tears were streaming down my face, and my closest friend Esther was also weeping. She was asked to send healing energy to me for six minutes while standing behind me with her fingers over my crown chakra. The group held me in light and healing.

Afterwards, we all sent healing and energy to Esther, who had to stand all that time. 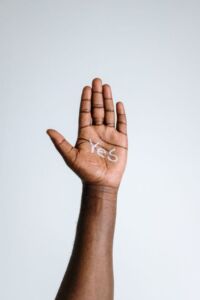 I felt vitally alive, tall, filled with vertical feelings, knowing I was deserving and worthy of this elevated experience! I felt high but centered. Dr. Schubot reminded the group that it was their commitment to hold me in their love that had made it possible for me to give up my old pattern of feeling that I was wasting their time. I had realized that they loved me, that they were committed to being a part of my experience, that I wasn’t alone. Dr. Schubot thanked the Creative Source for being in all our lives in such a loving way. My final comment, which brought laughter and applause, was that perhaps I wouldn’t be so angry at some men I knew.

Dr. Schubot explained that in regression work the healing could occur at a number of nodal points, such as at the time of living out the theme, or at the moment of crisis, not just at the point of death. Not only the point of healing but even the type of therapy could be indicated by the collaboration of the unconscious through arm resistance. It was a wonderful feeling for me to learn stillness and patience and not to have to think I had to have the right answer. I could wait for it to come from the Creative Source.

On my return home I was fortunate to have several days free of obligations and interruptions, during which I could review, reprocess, and write up the experience I had been through. The ocean, sky, stars, sunsets, trees, and flowers around my beach home on my small Puget Sound island bathed me in further healing and tranquility. I ate only a fraction of what I usually crave, which, since I am short, chubby and often use food as reward, recreation, and solace, was a blessed by-product.

The smaller appetite and weight loss continue. I feel in control and centered in my life; chic, capable, and fascinated by the process. I have positive feelings about the breast lumps which have reoccurred after fifteen years and are being monitored medically. I am choosing not to let my body become the dumping round for unresolved anger-loss feelings again. The term “loving allowance” has more meaning for me, letting me feel accepting toward others and their need to do their thing. Me, too! I have released my squeamishness at being healed by Jesus, because I believe in a Creative Source, and Jesus seems to me a master channeller, as are others to a lesser degree. My life continues to unfold and overflow!