Past-life therapy often deals with issues that involve interpersonal relationships. Connections with mothers or fathers, relationships with children and spouses or with good friends, are often influenced by the information and insight that emerge from a past-life regression. However, the literature on past-life therapy tends to focus on intrapersonal material rather than relationships, which is surprising considering how many people seek therapy because of problems in a relationship.

Conventionally, tracing current relationships to past lives is done with one person, and I will present some examples of this approach and its effectiveness. Following these I will describe a personal experience where several parties to a relationship were regressed together and shared the past-life experience they lived out mutually. It is proposed that this dual regression be explored as an expanded relationship experience.

Tracing a Current Relationship to a Past Life

Teri came because she felt there was a past life underlying the difficulties in her relationship with her husband Ken. She wanted to explore that possibility. They had been married several years and had one child, when her husband ran off with one of her best friends. They divorced and lived apart for nine years, then remarried. By the time she sought therapy Ken had gone away again this time to live with another friend of hers. She felt tied to him and wanted to understand her intense feelings and also to determine what caused him to run away—was he just escaping responsibility?

Under regression Teri found herself as “Anna,” an attractive young lady of seventeen, standing in an English meadow.

Teri:   I’m seventeen but I feel older. It’s about the time of King Henry VIII. I’m wearing a long dress. I see a man named Charles who is involved with me. We have an intense romantic relationship; he’s fun. He is politically involved and has high ranking. I’m wearing a wedding ring, but Charles is not my husband; he is a playboy, and George is my husband. George suspects something is going on between Charles and me but he’s not sure yet.

They are invited to a big party at someone’s castle, and Charles is also there. George is feeling sad. He suspects that Charles and Anna are having an affair, but he’s not sure. He knows that Charles is a notorious flirt and that he has been involved with many women.

George decides to confront Charles, and an argument ensues. Suddenly they are having a sword fight. Anna becomes frightened.

Anna:     I was just having fun, I didn’t mean it to get out of hand…Oh, Charles has stabbed his sword into George’s heart…I hate Charles. All I feel is anger. He just walks away real cocky…(Screaming) You had no right! I feel disgusted that it turns out this way. I’m disgusted at myself. I loved George, but not intensely. I know it’s my fault this happens, but I don’t feel it is, somehow. It was really Charles’ fault; he has such a temper. George was just a victim.

A few months later, Anna stabbed herself and died. Her last thought:

Anna:     I’m too angry to live. I made a mess of everything. I want to make it up to George. He deserves to stab me back.

Teri felt that her husband, George in that medieval life, is her husband Ken in this life, and that he is paying her back. He had even commented recently, “Now, we’re even!” She left the therapy session more at peace with herself understanding the karmic connection between herself and Ken, and why the relationship was so intense for her. She had not finished the work of forgiving all the parties involved, including herself, but by this time she was well on her way to doing so.

A Karmic Chain of Murders

Brad wanted to understand why he had such difficulty ending a relationship with a young woman. They had broken up, but he could not seem to let go of the relationship and could not form relationships with others. He entered a past-life regression to explore this.

He found himself standing in the dark outside a house where a light burned. He waited until the light was extinguished, and finally entered the house and found himself upstairs, standing by the bed of a woman who opened her eyes and stared at him with hate. He recognized the woman as his girlfriend in this lifetime, and soon he realized that he had murdered her in that house.

Brad:    We murdered each other. She had killed me in one life, and I had killed her in another. Then she killed me, and I killed her.

This karmic chain of murders explained why they could not separate in this life. They had unfinished business with each other, and thus they were bound by guilt. I invited him to forgive her for her murders, and to forgive himself for killing her. With this new knowledge he returned to the relationship, better equipped to understanding both himself and her. 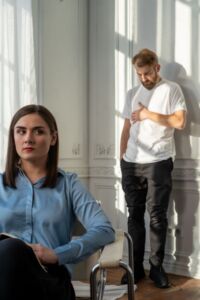 It was a personal experience that led me to move from individual regression to wondering if the dual regression of two people related both in this life and in a former one would not deepen and amplify the regression experience. The setting was a party at my home. I was offering apple juice when one of the guests, Beverly Carter, attacked me with a glare and the suspicious question, “What’s in it?” And she added, “I don’t trust you.”

As the party ended I told her that her comment had hurt me, and I wanted to know what it was about. Her reply was that she had just blurted it out and didn’t know where it came from; I had not offended her or given her any reason to distrust me—not in this life, at least. My feeling was that it came from another lifetime, and we should discuss it later.

In a phone call we agreed that the feeling must have come from another life, and when I suggested that we explore the situation together at the next meeting of the past-life therapy group, she agreed. On a winter day about 15 people gathered, and I suggested that Bev and I would like to work on this conflict with the help of the group. A past-life therapy colleague, Dr. Paul Hansen, agreed to regress me and took me back to that other time and place. Bev sat nearby with eyes closed and tried to tune into what I was seeing and experiencing while the group made a circle around us.

What I saw and felt was a life in Egypt where my young female companion and I were playing on the banks of the Nile. As I described this scene, I became aware that Bev had joined me, lying on the floor parallel to me. In the ensuing regression we both experienced essentially the same story! I understood that Bev had good reason to be suspicious of my drink, as I had poisoned her in that Egyptian life. With the help of Dr. Hansen’s skillful guidance we worked on forgiving and understanding each other and resolving the power struggle that had destroyed our relationship. Afterward, we invited the group to enter the discussion, and they shared their feelings about the reality or unreality of the experience. I pointed out that we might have broken new ground by using parallel and simultaneous regressions, even though accidentally, to help resolve a conflict.

Once before, by request, I had tried a dual regression with two young women who were about to launch a business venture. They felt that they had had a past life together, and that they needed to explore it before working together. I had them lie on the floor parallel to each other but with the feet of one at the head of the other. Each experienced a different past life, but in each instance the main issue in that life had to do with authority. Both of them felt they had contacted important material that would be helpful to them as they related to each other in the business they were starting.

On several occasions I have done a simple meditation with a friend to see if we could recover a shared past life. Bypassing a formal induction, each of us closed his eyes and went deep inside for information. In each instance we saw something like the same situation, with details somewhat varied. What we saw verified our feeling that we had known each other and had had some kind of close relationship. These informal experiences pique my curiosity about the possibility of dual or parallel regression and led me to further exploration.

I had occasion to guide a triple regression at a workshop I was leading recently in Texas. One woman in the group said she wanted to work on a past life but was afraid it might hurt two others in the group. When she asked their permission, they were glad to grant it. I suggested that all three lie down and the other two try to see if they could experience with her the life she recalled. In the induction I took her back to the life she needed to see. The other two, lying on either side, indicated that they were there also.

The young woman, Rita, found herself as a girl of 13 walking into a village to take her uncle his lunch. She was in love with him and hated her step-mother. Eventually she ran away from home and tried to live with her uncle, who refused to take her in. He loved her and felt that such an arrangement would not be proper. She then walked into the nearby ocean and drowned herself. The two lying beside her were the stepmother and the uncle in that earlier life. Each saw the scene essentially as Rita did, and they added details for her afterward. The uncle, for instance, had recovered her body from the ocean and buried her. He confessed that he loved her, something important for her to hear. She reconciled with the stepmother and asked her forgiveness.

These experiences can only suggest the possibility of dual or parallel regressions, since they are limited to a regression shared in its essence with another person at the same time, and another regression where three people experienced basically the same events and found resolution of conflicts that had bothered them. However, the potential of such regressions to resolve conflicts in relationship is exciting and suggests that this new paradigm is worthy of further experimentation and research. Its possible benefits in resolving marital conflict, impasses between business partners, and stale-mates between family members, make it worth further exploration.