Did They Hide the Bodies? The Population Problem – Erik Youngberg (Is.17)

Home JRT Article Did They Hide the Bodies? The Population Problem – Erik Youngberg (Is.17)

Erik Youngberg, an author new to the Journal, discusses the familiar “population problem” and presents surprising new findings that turn the problem on its head. As well as neatly solving the population dilemma, his article reminds us all to look with a skeptical eye on any “conventional” assumptions.

You might already hate for skeptics to ask this question: “How can reincarnation be possible? More people are alive now than have died since humanity began.” They have asked it for over two decades, and it is the most devastating argument against reincarnation there has ever been. As many people have noted, ordinary theories of rebirth become impossible because there are not enough past-life bodies to go around. Of course, reincarnationists have developed explanations, but none that have gained widespread acceptance. After examining the controversy, I will present evidence that it finally can be ended.

Before the 1970s, reincarnationists could easily explain population growth. Back then, no one believed there were more people alive than had ever been born. Reincarnationists said that only some of the souls that reincarnate in human bodies are physically incarnate at any one time. In ancient times, fewer souls were incarnated in the earth, and more souls existed on the “other side” than do today. Souls formerly waited longer to reincarnate. Now, more bodies are available, presenting more opportunities for soul growth. Fewer souls are waiting on the “other side” than ever before.

This theory worked perfectly until people began to believe the new population growth claims. Even if people view the claims conservatively, so that the earth’s current population merely equals the amount of previous human deaths, that leaves only one past life for each person. And the numbers will get worse as the population continues to grow.

If we each have only one past life, then much of the evidence for reincarnation is invalid. For example, past-life regressions and the Edgar Cayce readings tend to present several past lives for each person. Only investigations of single past lives, such as the work of Dr. Ian Stevenson, do not conflict, and even he does not suggest that the one lifetime he has investigated is the only one that person has lived. Further, the theory of reincarnation loses its practical value without a series of lives to work out karmic patterns, and these series are clearly seen in past-life regressions for therapy.

One way people try to solve the population problem is to refer to lost civilizations, such as Lemuria and Atlantis. Conventional demographers do not include these societies in their population estimates, but many more people might have lived than is commonly believed. This explanation has two problems. First, it makes belief in reincarnation depend on the controversial existence of these societies. Second, the explanation only provides past-life bodies in lost civilizations. Each person is still limited to one past life in a land that is conventionally recognized. Yet, as Sutphen notes (Sutphen and Taylor, 1987), past-life regression clients usually recall several lives in recognized historical periods. If the regressions are wrong, then we must give up much of our evidence for reincarnation.

Other people refer to transmigration as the solution. This theory states that animals can reincarnate as humans, and humans as animals. As souls grow, they return as higher forms of life. The most evolved souls in the earth incarnate as humans. In the millions of years since life began on earth, souls have collectively improved. Now, more souls deserve human bodies than ever before. Accordingly, the animal population has decreased as the human population has increased.

If transmigration happens, then again we lose most of our evidence for reincarnation. With some exceptions (Fisher, 1984), most regression therapists find animal past lives very rare in their work with clients. The Cayce readings mention human past lives exclusively.

A successful metaphysical writer suggested to me that many souls might be incarnating in the earth for the first time. Perhaps all the regular human souls are incarnated, and more souls have come here to fill the extra bodies. Or new souls might have come here out of some higher realm of development. They either flunked out of a higher plane or came here to serve humanity.

This explanation does not provide enough past-life bodies. Recall that, without new souls, there is one past life (at best) available for every person who is alive now. But if some people have new souls, they are not “using up” the amount of available past lives. If a body houses a new soul, the past life it would otherwise have had is available for someone else. If half the population has new souls, then the other half has two past lives for each person. The problem is that regression therapy tends to uncover several past lives for each person.

If we increase the number of new souls to ninety percent of the population, then the remaining ten percent is allowed ten past lives each. That might be enough past lives, but it means that hardly anyone who is regressed should recall past lives on earth. Once again, either we give up our evidence for reincarnation, or we keep the population growth problem.

In the 1970s, Dick Sutphen published his theory of “simultaneous multiple incarnations,” or “parallel lives” (Sutphen, 1978). According to this theory, one soul can incarnate in several bodies at the same time. In the past, when fewer bodies were available, souls usually incarnated in one body at a time. Now souls are accelerating their growth by incarnating in multiple bodies. The same number of souls is still incarnating in the earth, even if it does not look like it.

This explanation stands apart from the others we have examined because it leaves the evidence for reincarnation intact. In fact, Sutphen claims to have uncovered regression evidence that specifically supports parallel lives. And his theory is not an ad hoc way of explaining population growth; he published his theory about parallel lives before he wrote about the population growth problem.

Ironically, the population growth problem, the center of this controversy, does not really even exist. In 1995, I discovered Carl Haub’s article published by the Population Reference Bureau in Washington, D.C. (Haub, 1995). Haub is a demographic editor for Population Today. He says that some now-forgotten writer stated in the 1970s that 75 percent of the people who had ever been born were alive at that time. The statement was ridiculous and inaccurate, but became widely believed and was promoted by the media. 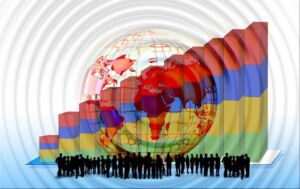 Haub systematically guesstimates how many people have ever lived. He admits to using a semi-scientific approach, because humanity kept no demographic data for 99 percent of its existence. Referring to the United Nations’ Determinants and Consequences of Population Trends (1973), Haub assumes modern Homo sapiens to have first appeared in approximately 50,000 B.C. He then lists how many people might have been alive in different years: 8,000 B.C., A.D. 1, and so on, up until 1995. The years on his list become more frequent and the population numbers larger the closer he gets to 1995.

Next, Haub assumes a rate of constant population growth between each benchmark year. He realizes that no one knows whether population growth was steady or fluctuated dramatically. He takes the simpler and more conservative approach.

Haub considers early humanity’s infant mortality rates, which might have been 50 percent or higher. He writes that for most of human history, life expectancy at birth averaged only ten years. He estimates how many people would need to be born each year to allow for steady population growth between the benchmark years.

Finally, Haub adds the numbers and arrives at his conservative conclusions. He settles on approximately 105 billion people who have ever lived. That means that in 1995, only 5.5 percent of the people who had ever been born were alive at that time.

That leaves about nineteen past lives for each person in conventionally recognized periods of human existence. Haub estimates conservatively, so the number might be slightly higher than that. The number is probably lower than nineteen, however, because we need to leave some past lives for new babies as the human population increases. Of course, the exact number of past lives varies somewhat from person to person.

People who claim to have had many more than nineteen past lives as humans are either wrong or had many of those lives in lost civilizations. One project that regression therapists might consider doing would be to see if their clients’ memories match these figures. Therapists might also study how many past lives end as infants or children, because of the low average life expectancies and high infant mortality rates Haub describes for most of human existence.

One impressive, well-known study of population statistics in past time periods has already been done. In the 1970s, Dr. Helen Wambach used two samples of people, the first of 800 people, the second 300 people (Wambach, 1978). She regressed each person three times, and had the subjects randomly choose (from a selection of five) which time periods to explore. She later counted how many subjects went to each time period in history, and tabulated the results.

Her results from both samples roughly correspond to the version of the past described by Haub. Wambach’s table only goes back to 2000 B.C., and she found a relatively low population in ancient times. From A.D. 400 to A.D. 1600, her table’s population rates double, and then double again by 1850. In Haub’s table, the world population goes from 300 million people in A.D. 1 to 500 million in 1650. For 1850 his table lists 1,265 million people. While Wambach’s and Haub’s figures are not exactly similar, both of them only claim to arrive at approximate figures for past time periods. And Wambach’s work deals not with actual population statistics, but rather relative trends. The correspondence between their work suggests that past-life regressions might accurately reflect former population trends.

Now that we can end the population controversy, I hope reincarnationists will not forget that it ever happened. We should remember that nobody is certain about any metaphysical theory. Although the alternative theories discussed above are unnecessary, they are still possible. And a host of other commonly accepted metaphysical theories might be incomplete or wrong.

But for now, we have one less problem. Reincarnationists can relax and take it one life at a time.

(This article appeared in different form as “A Reincarnation Theory Dilemma,” in The New Millennium, Volume 1, Number 2, October/November, 1996.)

Haub, C. How Many People Have Ever Lived on Earth? Population Today, February, 1995.