This proposal, currently in the process of formulation by the Rocky Mountain Research Institute in Fort Collins, Colorado, will investigate the healing potential of releasement from human-attached consciousness in Vietnam Veterans suffering from Post-Traumatic Stress Disorder. Dr. Edith Fiore, a practicing psychologist, in her book The Unquiet Dead, has described signs and symptoms which indicate such attachment. An early formulation of this research proposal is presented here in order to share with Journal readers the difficulties and evolving clarification of a research study in areas of paranormal healing and past-life therapy.

Background of the Problem

The Vietnam War has proven unique in the history of warfare. Never before has a war been so extensively covered by the press, so vociferously challenged by its detractors, and so destructive to its surviving participants. Table I provides a brief overview of the extent of the destructiveness of the Vietnam War to American soldiers. 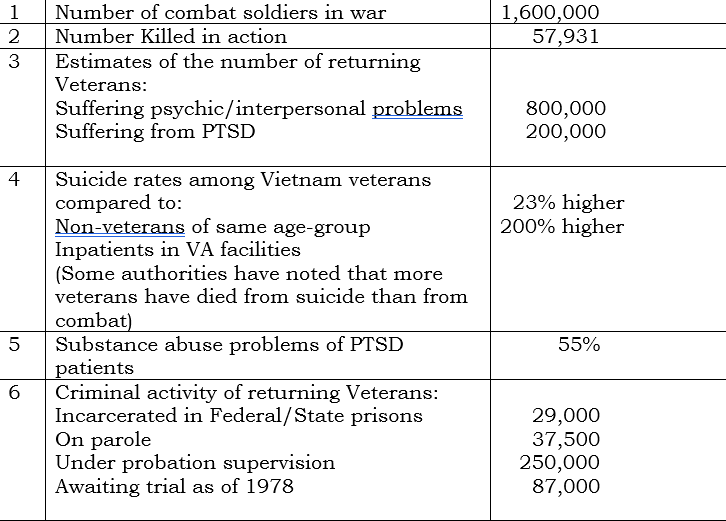 The suffering by Vietnam Veterans and their families, which is continuing 15 years after the war, is evidenced by the number of veterans diagnosed as suffering from Post-Traumatic Stress Disorders (PTSD). This term is used in the DSM III to refer to a complex of characteristic symptoms following a psychologically distressing event that is outside the range of usual human experience (e.g. war). These symptoms involve re-experiencing the emotions of the traumatic event, avoidance of stimuli associated with the event (or numbing of general responsiveness), and increased arousal for more than one month. Up to 40% of Vietnam veterans suffering from PTSD exhibit hostile aggressive behaviors, including domestic violence, explosive anger, chronic insomnia, suicides and attempted suicides, criminal acts, substance abuse, and other problems. There have been more casualties from suicides of returning veterans (approximately 67,000) than there were casualties from combat (57,000). While some problems can be attributed to prewar difficulties, many veterans have returned from Vietnam dramatically changed in personality.

Individuals without previous history of psychological problems have also manifested new personalities. Hendin and Has, in their informative book entitled Wounds of War, noted that a quarter of returning veterans, including women veterans, who had become involved in criminal behavior after their return from Vietnam, had no record of violent or criminal behavior before combat. They became involved in such behavior only afterward when they were manifesting the PTSD symptoms.

PTSD symptoms appear and disappear abruptly. It is as if another personality had temporarily taken control of the victim’s body. In this respect, the symptoms of PTSD overlap those of Multiple Personality Disorder (MPD). According to the DSM III the diagnostic criteria of MPD are; (1) The existence within the individual of two or more distinct personalities, each of which is dominant at a particular time; (2) The personality that is dominant determines the individual’s behavior; (3) Each individual personality is complex and integrated in its unique behavior patterns and social relationships. Often the original personality has no knowledge or awareness of the existence of any of the other sub-personalities. In the genera] population this disorder is associated with extreme physical, emotional, or sexual abuse during childhood years. Between 95% and 100% of all diagnosed MPD cases show a history of childhood incest, torture, or other abuse (Putnam, l984). However, not all people who suffer this kind of abuse develop MPD. The specific attributes of the MPD disorder and the requirement of early childhood abuse of a specific form minimize the likelihood that PTSD symptoms of vets are linked to Multiple Personality Disorder.

Dr. Ralph Allison, considered a pioneer in the treatment of MPD, says that many multiple personality patients exhibit symptoms of attached consciousnesses. He has encountered sub-personalities which were not true alter-personalities, and he has found it difficult to dismiss the unusual and bizarre occurrences as delusion. He has come to believe in the possibility of spirit possession and has described apparent cases of attached consciousnesses in people suffering from MPD.

It has been theorized that an attached consciousness originates when the separating consciousness of a dying person does not follow the steps assumed to be characteristic of the near-death-experience. The hypothesis is that emotions and feelings connected with a sudden, traumatic death force the consciousness to remain attached to the physical plane. Since the occurrence of sudden traumatic death is at its peak during active warfare, the possibility of dying soldiers remaining attached to the physical plane is intensified.

The following list of criteria has been collated from eight authorities for use in the diagnosis of acute attached consciousness.

Dr. Fiore has documented many of these evidences of attachment, which are also observed in PTSD. Many Vietnam veterans returning to the United States exhibit the physical, mental, and personality changes which Dr. Fiore has described. Not only are other people in the environment aware of such changes, but often the veterans themselves are perplexed by the changes that they experience.

These theoretical formulations, added to the failure of traditional psychological interventions to provide long-term relief for veterans with PTSD, have led to formulation of the following assumptions which underlie the proposed research:

Subjects for the proposed study are patients at the Veterans Administration Hospital in Denver, Colorado. An evaluation committee will select an initial pool of 30-40 inpatients or outpatients, this group to be reduced to 20-25 by the principal therapist, Dr. Baldwin. Dr. Baldwin will perform depossessions, when they are indicated, over a period of one month. Immediate and subsequent follow-up will be given to all patients by assisting project therapists. These follow-ups will include “hot lines” as well as specific appointments. Scheduled follow-up appointments will be made on a regular basis for the first three days, then at one-week, two-week, and four-week intervals. Additional follow-ups will be made at eight weeks and at 26 weeks in conjunction with later phases of the project.

Emphasis will be placed on availability of medical histories of each of the selected patients prior to the proposed therapeutic efforts. An analysis of each patient will be made by the evaluation committee just prior to the treatment of the patient by the principal therapist. At the end of the therapy program, each patient’s material will be given to the evaluation committee for end-result analysis of the success/failure of the therapeutic technique. The end-result analysis will be identical in method to the evaluation made prior to treatment.

Each therapy session will be audio- and video-taped to provide a basis for evaluation by the advisory board. The video-taping will be done by staff who are qualified to conduct therapy sessions and who can assist the principal therapist as necessary during the sessions.

This will consist of assessment of the physiological changes, if any, which occur during the depossession process. The selection of subjects, conduct of sessions, procedures for follow-up visits, and continuing availability of therapists will be similar to Phase I, Level 1. The physiological variables which may be measured will include: respiration rate, heart rate, infrared video recording, electroencephalograph data, weight changes, blood pressure, blood analysis, and urinalysis. Instrumentation necessary to accomplish this assessment may include an EEG/MEG machine, Brain Mapper Beam Machine, GSR instrumentation (low feedback machines) and Magnetic Resonance Imager.

During the final phase, following the culmination of the research activities, documentation and implementation of successful techniques developed during the research process will be made. There will be three major thrusts:

Critique of the Proposal

This innovative and ambitious research proposal has the following strengths:

As the formulation of the design proceeds, attention must be paid to careful formulation of the place of a control group and to specific behavioral measures of expected change. Also, a policy of obtaining informed consent from the patients must be established, and other ethical issues related to participation in the research study must be addressed.

Some recommendations for increasing viability and generalizability of this research project follow. (Other factors will emerge as the study proceeds).

This proposed research is directed toward healing Vietnam veterans. The technique is based on the assumption that the patient who has resisted all methods of conventional psychology may be suffering from attached consciousnesses. The consciousnesses are thought to be those of individuals who have died and who have subsequently attached themselves to the living patient. By use of the therapeutic technique used in this research it is hoped that the consciousnesses of soldiers killed in Vietnam may be released, and that surviving Vietnam veterans to whom they have attached will be freed and remit their symptoms. This therapy can be thought of as surgery to remove the primary source of the PTSD symptoms. The proposed project is not intended to prove possession or the reality of attached consciousnesses but instead is interested in healing the patient.

The Journal wishes to thank Dr. Albertson, Dr. Ward, and Dr. Baldwin for sharing their initial thinking on this innovative research with the Journal. We will report refinements in the design and progress in the implementation of the research in future issues.

(This is a condensed version of an extensive bibliography).

Parson. E. R. “The Reparation of the Self: Clinical and Theoretical Dimensions in the Treatment of Vietnam Combat Veterans” Journal of Contemporary Psychotherapy, 14:4, 1984.