Home/Book Review/CE-VI: Close Encounters of the Possession Kind: Interference from the Extraterrestrials Among us. William Baldwin

(as included in the The Journal of Regression Therapy Volume ΧII, No. 1, Fall 1998) 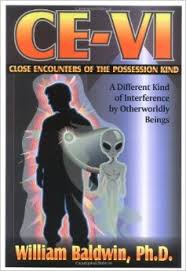 Once again, Dr. William Baldwin has introduced further startling, groundbreaking concepts and therapeutic modalities for use by therapeutic practitioners. In this most recent book, he reviews the main concepts of spirit attachments and Dark Force Entity (DFE) attachments that he first presented in his 1992 book, Spirit Releasement Therapy: A Technique Manual. But in this new book he goes beyond to focus more closely on attachments and takeovers by extraterrestrial beings (ETs) and DFEs. Even for therapists who have been working with various types of spirit attachments, this book adds new perspectives, newly realized phenomena, and new possibilities for treating people with unwanted influences.

Baldwin acknowledges that much of human experience as recovered through altered states of consciousness cannot be scientifically tested and/or validated. Yet he tells us of a number of cases of alleged attachments and the relief and improvement that the human “host,” the client, experienced after release of those entities. He draws on the reports of his clients, finding certain common factors.

Baldwin finds that the variety of ET beings that attach to people is wide. Many ETs claim that they have never had a former human lifetime, while others claim they have had incarnations on earth as a human in a human body. Most often their forms seem to be non-physical, and sometimes they are spirits of deceased ETs. Sometimes they are hidden, lost, or marooned here on earth (sometimes as punishment by their own kind). Some have no home planets to return to because of widespread destruction there. Some say they are here to gather information and scientific data about humans. These seem to he scientists, researchers, and technicians, very diligently carrying on their work either within human bodies or through implants while operating on a spaceship at a distance. Often they deliberately manipulate their host humans to experience strong emotions or desires, while monitoring the results.

But there is a positive side as well. Some ETs say they are here to assist humans to spiritually evolve, or to help humans through predictable catastrophes and massive earth changes. These beings do not seem to be hostile, disruptive, belligerent, or destructive, and they are reasonably cooperative about leaving the host after the invasive nature of their presence and activities is explained to them. Some beings of this type are more spiritually advanced than we humans are (and more technologically advanced, too), although some are more self-serving and less spiritually aware than others.

According to Dr. Baldwin, any attached ETs who are totally sell-serving, harmful, and without any regard for the human host are influenced, controlled, or possessed by DFEs. In treating such a situation, the DFE needs to be released and then the ET. This is not always easy. Many of them are here to conquer humanity and take over the earth for their own purposes, and they affect people in mans dreadful ways. Dr. Baldwin describes examples of effectively releasing first these DFEs, then their “commanding officers,” the “legions” and “minions” of DFEs, and finally the attached ETs.

Dr. Baldwin includes helpful information about other, related, phenomena. He discusses Remote Spirit Releasement and gives examples of remote communication with ETs to learn the reasons for their actions. Also discussed are alien-human hybrids and the interbreeding program, alien-alien hybrids, the missions that ETs have when they attach to human hosts, the Vanishing Twin phenomenon, retrieving mind-fragments that split off from one person and attach to another, dark cords attached to various parts of the host’s body that suck out life force energy to be stored elsewhere to be used for sustenance by other entities, the origins of DFEs, soul thefts, the contracts made between ET civilizations and DFEs (and with many humans throughout history), the true origins of mankind (genetically created and manipulated by ETs), self-protection against approaching entity intruders, and using past-life therapy on attached entities.

This book is a treasure trove of Baldwin’s findings on these and related subjects, and contains numerous samples of Baldwin’s effective dialogues with various kinds of attached ETs and DFEs. All of the concepts discussed are bolstered by footnotes and a bibliography, allowing the reader to pursue further research. It is obvious that Baldwin has read copiously and gathered what support there is for his understandings.

As a regression therapist who has explored ET experiences with more than 200 clients during several hundred regressions, I, too, have learned significant perspectives from reading Baldwin’s book. I recommend CE-VI: Close Encounters of the Possession Kind for anyone conducting releasement therapy and/or seriously involved in UFO/ET research.