Reincarnation and Biology: A Contribution to the Etiology of Birthmarks and Birth Defects - Ian Stevenson

Home/Book Review/Reincarnation and Biology: A Contribution to the Etiology of Birthmarks and Birth Defects – Ian Stevenson

Reincarnation and Biology: A Contribution to the Etiology of Birthmarks and Birth Defects. Two volumes, hardcover, 2268 pages, $195. 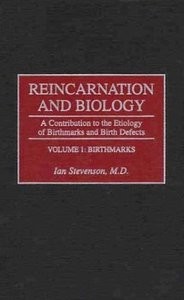 It is a difficult task to adequately review a 2268-page book! I will start by saying that in this long-awaited two-volume work, Dr. Ian Stevenson has created a masterwork. For those of us who wish there were some scientific proof of reincarnation, this book has hundreds of carefully researched cases, examined with the intent of studying a segment of the reincarnation phenomenon, birthmarks and birth defects, that gives concrete evidence of supposed past lives. Stevenson has published many prior works that document the past-life memories of people, many of whom were children, who remembered a recent past life. When possible he took them to visit the family they lived in during the past life, and then interviewed members of the present-day and prior families to validate those memories.

This new book goes even further. For the past 20 years Stevenson and his associates have collected cases of children who have birthmarks or congenital defects, and traced how they were connected to the past life the children reported. Frequently the connection was a death in the prior life by violent murder, which they often remember. The children who remembered these lives are carefully interviewed, as are their present and past family members. Most of the children were young when they began to talk of their prior lives, between two and four years old. They can often remember many details of the other life, as well as information about family members which proves to be factual.

Many children are confused over their two identities. They may have behaviors in the present which reflect the prior personality, such as phobias or fears of the weapons used to kill them, or of police or soldiers involved in the death. Many have nostalgic longings to return to the previous family, and preferences for the favorite food, clothing, and interests of the prior personality. They may play games that reflect their prior occupation. They may also reveal the adult personality’s sexual interest in their prior spouse. (One person married his former spouse when he became an adult). Stevenson also seeks for medical records and diagnoses of the previous personality to see if they match the present personality’s memories.

Imagine how rare these cases must be! It is a feat in itself to have had such a creative premise, and to search in many countries for examples. They come primarily from India, Burma (Myanmar), Thailand, Sri Lanka, Turkey, Lebanon, and native peoples of Alaska, British Columbia, and Nigeria. Many of these groups have a strong belief in reincarnation, frequently of ancestors who choose to be reborn. There are few US cases reported, possibly because reincarnation is foreign to the prevailing culture and a child’s tale would not be taken seriously.

Stevenson is careful to point out the deficiencies in his cases. These include problems with the validation of the informant’s memories, the poor systems of medical records in many countries, the use of interpreters, and the inaccessibility of some of the families.

Volume I has cases showing correspondences between mental images and physical lesions. For example, he describes interesting cases where a woman’s impressions during pregnancy seem to have transferred to her infant. She might see a person with a large birthmark and her child is born with a similar birthmark in the same place. There are also cases of birthmarks in the present body that correspond to wounds in the prior life. Some cultures believe an ancestor will tell the mother of their coming rebirth, either before their death or in a dream during the pregnancy. The ancestor tells the mother that he or she expects to be born again into her family, and that she will know which child she or he is by having the same birthmark as in the past life.

Volume II has case reports of people who have birth defects and other disorders similar to those in a remembered past life. Volume II also has several interesting appendices: lists of all the cases reporting maternal impressions, or that suggest reincarnation. There are numerous photographs of both birthmarks and physical defects.

I find Stevenson’s new work both fascinating and scholarly. It makes a strong contribution to the search for verification of reincarnation. Case histories are frequently disparaged as not having the same level of scientific rigor as studies utilizing subject and control groups, but we know that anecdotal cases point out important patterns and tendencies about a group of subjects. As descriptive or correlative research, they are becoming more acceptable in the social sciences and other fields of interest which do not easily lend themselves to laboratory research. In the present situation we have not only subjective data from interviews, but objective instances of correlating birthmarks, deformities, and medical records which are more concrete evidence.

In addition to the two-volume work, Stevenson has written a synopsis of it, available in paperback and cloth. It has enough cases to give the gist of his findings, adequate for anyone who wants a quick view of the topic. It also has color photographs that are similar to those in the longer work, which are in black and white.

He hopes his readers will begin with the synopsis and then want more detail, as can be found in the two-volume work. This work is a treasure trove of research in an area in which many people have an interest.

Boyce Batey, Executive Director of the Academy of Religion and Psychic Research, sums up the value of this book when he says “Ian Stevenson is respected by his peers as one of the most meticulous researchers. He considers a range of viable alternative explanations for each case of claimed ‘past-life memory,’ and dismisses cases that have other explanations. This work, his magnum opus, is one of the most important contributions to the field of survival research in our generation.”

Returning From the Light, by Brad Steiger.