Returning From the Light, by Brad Steiger.

(as included in the The Journal of Regression Therapy Volume Χ, No. 1, Fall 1996) 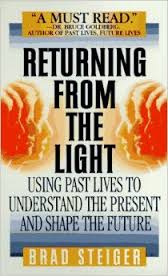 In Returning From the Light, Brad Steiger brings us his many years of writing and research as well as the personal experiences of himself and of those that he interviewed. Steiger discusses and demonstrates the many benefits of using past lives to understand and heal our present lifetime challenges of all kinds.

Steiger starts the book by discussing his own thirty-six year phobia for flying, a serious phobia which had no apparent cause and greatly interfered with his need to fly to promote his books. It was only after a spontaneous past-life recall one night in 1972, when he experienced himself as a German pilot in World War I who was killed in aerial combat, that he was able to start to heal his unexplained and overwhelming fear of flying.

Steiger has never been afraid to deal with the unusual and controversial: In this book he discusses situations where more than one person claims to be a famous historical person, such as Mark Twain or Joan of Arc. He also deals with apparent memories from other worlds and dimensions, including people who claim to have memories of past lives as extraterrestrials, refugee aliens from other worlds, pure energy essences, or reptilian humanoids.

From this reviewer’s perspective, the most interesting interviews tell of past-life therapists’ work with their clients. Some of the best examples come from various APRT members, including one of the editors of this journal, Dr. Russell Davis. Dr. Davis cites the story of his patient, Helen. Helen had two problems she had suffered from most of her life: She was unable to tolerate anything around her legs and was unable to even sleep with her feet under the covers, and she also suffered from neck pain. Her regressions uncovered a life in Europe when as a young girl she had been chased by an older man who had caught her, tied her feet, and then while attempting to rape her had broken her neck. A second regression found her being gang raped in a livery stable and then hanged by the neck by a group of young toughs. Dr. Davis concludes his section of the book as follows: “The sessions with Helen…were extremely successful in that she was able to extinguish a phobic reaction to having anything around or over her legs and achieved a complete alleviation of a long-term unexplainable (at least from a medical perspective) painful neck condition.”

The information that Brad Steiger brings together in this book is inspiring in that as we learn more about ourselves we must stand in awe of the magnificence of our divine natures. We are reminded that we have within ourselves the power and the tools to reach wholeness and fulfillment.

Echoes from the Battlefield, by Barbara Lane

Reincarnation and Biology: A Contribution to the Etiology of Birthmarks and Birth Defects – Ian Stevenson