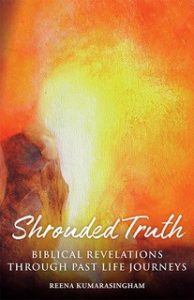 Of all the books that I’ve read in my 45 years, there are only a few that I can say have changed my life. One of them is Shrouded Truth: Biblical Revelations through Past Life Journeys, by Reena Kumarasingham.

Reena Kumarasingham is a regression and life-between-lives therapist who has been a trainer and supervisor for the Past Life Regression Academy for many years, teaching students in the UK, Australia, and the United States. In fact, she was my teacher.

Her new book, “Shrouded Truth,” explores the past-life memories of eight souls who lived as some of the people closest to Jesus throughout his life. The story she weaves together is based on independent accounts accessed through the past life regressions of eight separate individuals who did not know each other and had no previous knowledge of each other’s accounts beforehand. And yet, each experience corroborates the others.

What unfolds is a layered, textured tale of family, friends, empowerment, survival, spirituality, connection, sacrifice, and, at the core of it all, love. That tale is all about what happened before, during, and after the crucifixion of Jesus Christ. And that tale differs, sometimes drastically, from the fundamental beliefs of Christianity as we know it today.

It is fascinating to me that Kumarasingham was brought up as a Hindu in Malaysia, a country where the dominant religion is Islam. She had very little prior knowledge of Christianity other than the secular narrative. She also did not conduct any research until she was confident that she had collected all accounts—to stay as objective as possible during the sessions and flow with the information that emerged. Because the accounts vary so much from that which she did know, she wasn’t sure at all that anything would come of it. What encouraged her was that these first-hand accounts were, on so many points, so similar. This, to her, was remarkable.

On the opposite edge of the spectrum, I, as just one member of the audience for this book, grew up in a devout Roman Catholic home. I spent 16 years in Catholic education—from grade school through University. It is safe to say that I have a very good grasp not only on that which is taught in the bible, but that which is taught as doctrine of the Catholic Church. From my educated perspective I can say is this: This book, in a stroke of loving, revelatory genius, turns Christianity on its head.

As a regression therapist I respect Kumarasingham’s professionalism, and her protocol in honoring the emotions and therapeutic healing of the subjects just as much as integrity of the research. All this is abundantly clear in the work as a whole as. I expect that we will see a surge of interest in regression therapy in the years to come as a result of this book.

I believe that it is safe to say that I will not be the only one whose life will have been changed at the close of this particular back cover.

Return to Life: Extraordinary Cases of Children Who Remember Past Lives by Jim B. Tucker, M.D.

The Present Power of Past Lives by Joseph Mancini, Jr., Ph.D., CCHt