Sunday November 11, 2001. It was my great pleasure to attend the Master Summit with Hazel Denning, Ron Jue, and Winafred Lucas. Dr. Lucas conducted an experiential Past Life Regression with her group of 80 plus attendees.

As the door opened to my regression experience, I saw a small rolling hill that overlooked a beautiful green pasture with many large trees in the background. When the door shut behind me the scene quickly became a WW1 battlefield; gray, overcast and mud everywhere, devoid of all life. Leading three other soldiers, I walked up over the small hill and was immediately shot (my impression, I was an English soldier). While dying in the mud, I realized the other soldiers had abandoned me as I ascended the hill. The officer in charge of my company had conspired with the other men in my squad to intentionally get me killed. For some reason I was not well liked. 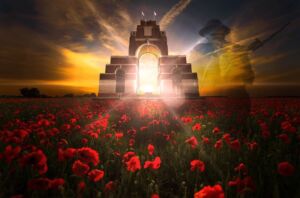 Realizing this, my final dying thought was never to trust anyone, especially someone in a leadership role. Interesting to note, while the feelings of the experience were very strong, there was more of a sense of awareness of the actions than a personal/ individual recall. I realized the soldiers’ spirit had never made the transition from the earth plane. I immediately recognized this was not my past life experience but rather one of an attached earthbound entity. His attachment to my body happened within hours after my birth. This entity’s dying thoughts and belief had a great impact on my daily experiences. My general distrust of others, and particularly authority figures, seemed to originate from his experiences rather than my  own. The entity was released into the light, completing the process. I have noticed from that point forward, I have been more trusting of people in general, yet old habits die hard.

Valuable insights and healing were gained both into self and the wonders of multi-dimensional reality in which we exist…. Thank you one and all.