The Journey Within: Past-Life Regression and Channeling by Henry Leo Bolduc 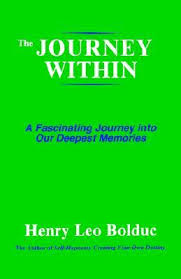 In The Journey Within, Henry Leo Bolduc provides some easy-to-read glimpses into his personal search for answers and, in particular, his exploration of the possibilities of hypnosis. Readers of The Journal of Regression Therapy should be able to identify with many of the experiences he presents in this informal, anecdotal odyssey. As Bolduc puts it, the first five chapters are “mainly about my years of research into past-life regression,” and chapters six and seven are about “what I have learned about hypnosis and past-life regression.” In the second half of the book, chapters eight through seventeen, Bolduc turns to focus on how some individuals, who have been hypnotized by him, became channels. As part of this, he includes generous samplings of their channeled material Some may find the shift from past-life to channeling phenomena a bit hard to follow, though Bolduc’s use of hypnosis in working with others seem to be the through-line.

Bolduc tells us that he first became interested in past-life work after reading The Search for Bridey Murphy. Shortly thereafter, in the early 1960’s, he began experimenting with friends. Becoming ever more committed to this work, he showed up on the doorstep of Edgar Cayce’s brother Hugh Lynn, in Virginia Beach, soon moving into the A.R.E. headquarters to live on a steady diet of Cayce Readings and related books.

He then jumps ten years in his story to the extended past-life regressions he did with his friend “Chuck” and others. During what he calls his “adventure years” of the 1970’s, he supported himself with an antique business in Ashby, Massachusetts, while turning his house into a center where “the sheer number of people passing through gave me an opportunity to conduct countless past-life regressions and to fine tune my skills as a hypnotist.” He also began work as a hypnotist at the Providence Hypnosis Center in neighboring Rhode Island, and wrote a booklet on self-hypnosis. During this period, he came to realize that “Hypnosis makes past-life recall easier by bypassing the critical conscious mind to give access to the subconscious memory banks,” but all the while he was wrestling with key issue familiar to Journal readers:

This is the great question of lives and the cyclic pattern of lives: How much can we change and write a new script and how much must we act out verbatim on the eternal stage of life?…I was to gain more insight into a larger picture of lives; karma; the way we change scripts; and the use of forgiveness as one of the important healing processes.

Although he claimed that “In those years of research and experience I saw few set rules concerning past lives,” Bolduc was able to observe that “people always seem to have choices,” that “patterns can be changed,” that “hearts can be healed,” that “when we study and learn we pass our tests and we progress,” and that the “earth school is usually a merciful institution.” In addition, he came to realize that “The purpose of past-life work is to understand, to learn, and to grow. I sometimes call it ‘healing the past’.”

Moving back to Virginia Beach and marrying, he began hypnotic work with Daniel Clay in 1983. “Daniel’s psychic channels, or chakras, were bursting like floodgates,” he writes. “As he voyaged through the layered seas of his subconscious,” and “as Daniel tapped a different level of consciousness,” sources apparently from beyond began to communicate through him, This material came to be known as the teachings of “The Eternals.” In a second, extended series of hypnotic sessions with Bolduc, the entity “Pretty Flower” is channeled through Eileen Rota, with dozens of pages of her channeled material included.

With regard to the first half of the book, Bolduc’s brand of past-life hypnotic inductions appears to be much the same as that used by many others working in this field, though he does add some variations of his own that are new to me. While I have no problem with the definition and understanding of channeling that Bolduc provides as the focus for the second half of his book, I do find the distinction he makes between the terms channeling and mediumship idiosyncratic and confusing:

And yet, Bolduc also defines channeling as the “process by which a person becomes a vessel or channel for his or her own Higher Self to come through or for the spirit and voice of an entity or entities from another dimension” (italics mine). The term mediumship can still apply to this latter realm, I think. Still, it sounds as if he is making channeling out to be the more spiritual, diffuse (universal mind), or self-generated (higher-self) enterprise; while mediumship, for him, is a faculty connecting us only to discarnate human spirits and other relative low-lifes in the cosmological hierarchy. This smacks of J. B. Rhine’s creation of “parapsychology” to distance himself from “psychical research,” the latter being viewed by him as too much associated with the suspect activity of Spiritualist era mediumship. However, I think that we are just going to have to admit, as the term settles ever further into our shared lexicon, that channeling is becoming an alternate term for mediumship. The only difference seems to be that channeling, as well as connecting us to supposed surviving human spirits—the primary but not exclusive domain of earlier mediumship—now is also being used to include contact with a range of trans-human or higher-human sources as well.

I realize that Bolduc’s forte is personal experience and helping others, not playing scientist or philosopher. “Whether these visions are always actual past lives or whether they are metaphorical or symbolic doesn’t really matter to me,” he writes. “What matters is that the person experiences new insight and self-understanding.” At another point he asks rhetorically if it matters whether the entities reached through channeling are real and separate. “I think it does not,” he replies, so long as “it guides a person to other sources of information.” And still later he admits, “Long ago I stopped trying to prove anything.”

I know that many who are involved in New Age activities today share Bolduc’s attitude, and I do not want to criticize them for taking this tack. Their way is more in the direction of trying out and perfecting the possibilities of what might be called “consciousness engineering.” At the same time, however, in the face of books such as Bolduc’s, I am re-inspired to continue along my own, complementary path, which is to try to best understand what is going on with regard to our human nature, our cosmos, and our God, in light of past-life work, channeling, and other anomalies, and to provide, in the process, an explanatory bridge of a sufficiently specific and convincing nature that will reach enough of today’s scientists, academics, and media. Like it or not, they are by default the leadership that maintains through too-limited paradigms our highly constrained consensus reality at present. I believe that they can be reached, and as a result our consensus reality can be changed, but not by books such as Bolduc’s.

If you like reading ad hoc first-person accounts about experiences similar to your own, or those that reflect your interests, then this book should be good reading for you. However, if you want a careful, in-depth critical study of the nature of either past-life regression work or channeling that moves our shared understanding of either of them any further than what we already know from existing sources, then you will probably be disappointed, Still, the how-to-do-it material, especially as embodied in the appendix, will be especially useful to fellow practitioners. It includes a detailed transcript of an “entire present and past-life regression session for your personal use,” a set of “Channeling Guidelines,” a list of “Periodicals and Books on Hypnotic Regression,” and a 14-step chronological guide to the regression process.