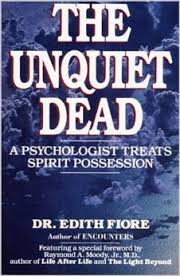 Even in these lightly sketched chapters, we find thought-provoking material: that the spirit of the host and the entity fight over the host’s body and mind; that some individuals like having an attached spirit and know it is present: that a seemingly overlapping past life may be that of a spirit, not of the host; and what a person feels like when freed of spirits: “Now it’s possible to be me. I didn’t know I was me all these years — that there was a “me” that could be free.” We are also told that the real patient is the spirit and that a therapist is not to try to brutally “kick out” a possessing spirit. Probably the most explosive fact that Dr. Fiore brings to our attention is the percentage of her clients whom she has found with attached spirits: 70 percent, a truly astonishing number, but one which closely matches my own experience with clients.

An important chapter follows, dealing with why spirits remain with us: ignorance, confusion, fear, obsessive attachments, addictions, and so on. These, of course, are the ego-based reasons, not the metaphysical ones. Another critical chapter details the effects of possession: physical symptoms of all kinds, as the spirit’s energy pattern impinges on the physical body of the host; mental problems such as concentration, deteriorating memory; emotional problems, as blanking out (“This can’t be me”), phobias, depression, suicidal urges. These originate from the character of the entity. Addicted spirits can cause addiction to drugs, alcohol, smoking, and over-eating. When the spirit dies old, it can cause symptoms of aging. When a spirit of the opposite sex attaches itself to a person, there can be thrusts in the host toward homosexuality and transvestism.

The central portion of the book is taken up with five chapters, each of which details one case study: the problems of Tony, Anne, Peter, Barbara, and Paolo, who come with issues in relationships, concentration, memory, multiple possession, and so on. These are fascinating accounts, but should be read, not reviewed. The most interesting single phenomenon in this section is Dr. Fiore’s finding that in relationship problems the resolution of her client’s issue telepathically resonates into the subconscious mind of the person with whom the client has the issue, changing the attitude of the other person without his/her conscious knowledge of what has occurred.

From here we are led to probably the most important areas for therapist and layman alike: the methods of spirit entry, ways to detect spirit possession, and most critically — how to do a depossession. As in her previous work, Dr. Fiore generously shares her techniques with the reader and then gives a complete script for depossession, which an individual can tape for himself/herself and use at home to remove the average attached spirit. Having covered these important subjects, Dr. Fiore then advises on how to protect oneself from spirit invasion and even how to detect and remove spirits from one’s home. She concludes with answers to typical questions, an acknowledgment that much is yet to be learned, and an excellent bibliography.

After viewing all of the unusual topics of Dr. Fiore’s book, it would be easy to dismiss her account as a product of the imaginations of Dr. Fiore and her clients, except for the fact that everything Dr. Fiore has written about has been replicated by other therapists around the world, myself included. Whether one is comfortable with the concept of spirit attachment or not, it is the responsibility of every therapist to investigate and deal with this phenomenon. Dr. Fiore’s book is the first of its kind and is mandatory reading for all therapists, as well as any person suffering from seemingly irresolvable mental or physical symptoms. This work unquestionably belongs in everyone’s library, and Dr. Fiore must be commended for her courage and foresight in writing and publishing this book. The value and importance of The Unquiet Dead cannot be overemphasized.

[…] behavior distracts one from those activities which nurture spiritual and physical vitality. Dr. Edith Fiore, psychologist and author of The Unquiet Dead, records numerous anecdotal accounts of clients who, […]