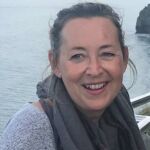 A unique case is presented involving what appeared to be a typical past life regression but in reality included a few interesting surprises. During a regression with a 36-year-old French-speaking farmer the author encountered an unusual spirit from America who makes an unexpected and profound appearance.

Our work becomes a big discovery when healing happens. We never know what is going to occur in the sessions. First of all we investigate, we ask, we tune in, and we ask again. We tune into our client’s energy and their thoughts and feelings. At some point we become one with our clients, and we both know what to do and how to solve and heal the problem the client presented. It is the client who choses what is best for them. So, our clients often surprise us. In the middle of our questioning, energy checking and intuitive tuning, they can suddenly jump up, start moving their hands, or say or shout something that seems completely random—but it turns out what they say is never really random.

I personally love these moments due to the challenge they bring. They look like a diversion from the client’s way to healing, but in fact they are the clues. Often, I see that these sudden movements or words are some form of communication of energies or vibrations that are present in the client’s energy-field but do not actually belong to the client. These attached energies simply wake up during our work. They seem to be in a hurry to get out from a place they don’t belong, surfacing and popping up like corks from champagne bottles. After they get out, clients feel much better, lighter, and clearer and they have a great sense of relief. It is interesting to find out why those attached energies come to each particular client. There is always something the energies and the client have in common.

One particular client case stands out for me. I will keep this client’s name confidential of course, and I will keep the identification of the attached spirit confidential as well. In this case the memory is too raw, and I feel lots of respect for the attached spirit. This case raises questions about how strong and persistent the bonds we create are while we are alive, and shows how huge the attractions of our emotional vibrations can be, as well as how spirits move from place to place to find us. Finally, it shows how our language can make us feel comforted and how effective or ineffective our prayers can be.

The client in this case is a 36 year-old male who drove 300 km to see me. His girlfriend, who was interested in shamanic healing, suggested he see me after she had found me on the Internet. The client presented himself as a farmer running a successful family business, which he liked. He had no complaints except that felt blocked. He was unable to specify what the problem was, he just felt blocked. He seemed very well balanced to me and seemed to be a strong person and a strong soul. I work in French, but I still make mistakes, so I always tell my clients if they don’t understand me they should tell me so that I can best help them. I also ask if they speak any English, just in case. Like the majority of my clients, this client spoke no English. I know now that language is never an obstacle to healing, but I still want my clients to feel comfortable with my funny accent.

The client was curious and relaxed, so it was an easy start. He went quickly into hypnotic trance and recalled two male past lives. In one past life lighting had struck his house while he was away. All of his family, including his wife and children, died in the fire. He became desperate from his loss—crazy and unable to go on with life. He died in bed with a feeling of despair, surrounded by the people of the village who had been taking care of him. He was not able to relate to them because of his grief.

In the other past life he was a soldier in Napoleon’s army. He got stabbed in his back by a bayonet. His heart stopped beating, but his feeling of despair kept him earthbound and roaming the battlefield for a long time after his death. “So many lives lost in vain,” he kept repeating hopelessly. We did all the necessary therapy. We worked with body and emotions and people-souls from these past lives. In many ways it was a textbook case. The client loved the transformation and integration he experienced, and all was working perfectly. After two hours of work all seemed to be in place to end the session.

I was doing the final body scan, where I move my hands a few centimeters over the client’s body to check whether there is anything else we need to work on. The client was happy and felt good, so I was giving him final hypnotic suggestions before bringing him to an awakened state. Then he suddenly said in a loud voice: “I cannot talk on a walkie-talkie.” This was the moment of surprise. I asked whether what he had said came from his own experience or someone else’s. “Oh no, not mine, it’s not mine! But I can’t talk on a walkie-talkie!” His response didn’t really explain anything to me. His claim seemed completely unrelated to the work we had just done. So, I did another scan and he felt a pulling sensation in his knees. We were able to bring out the energy that was behind the walkie-talkie claim. With the client’s permission I asked the energy to communicate with me through his voice. I asked my usual question: “Hello energy, do you have a name?” The energy just answered: “So many lives lost.” I quickly checked the content of our session and assumed that I was talking to a soldier in Napoleon’s army. So, I asked what had happened to his body. It took a while for the attached spirit to respond. He was disoriented and was not aware that he was not in his own body. He kept repeating: “So many lives lost. Nobody heard me.” I suggested that he go to where he had a body. He kept repeating the phrase, but I still didn’t get any picture. 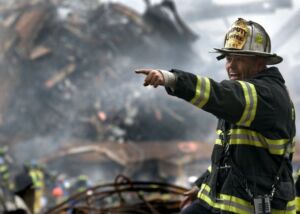 Then he said his name. It was an English name. And I got the picture as if seeing it on a screen. He was able to tell me his story, bit-by-bit, word-by-word, in French. He was beside the World Trade Center on September 11, 2001. He was a firefighter. He was standing by his truck calling on his walkie-talkie for more help. There was no response to his calls. “So many lives lost, nobody heard me on the walkie-talkie. They would have had time to rescue more people, but nobody heard me.” At that moment something happened and he lost his body. That was it. I had the sudden notion to tell him to go to the light; I said it in English. The spirit was happy, expressed thanks and left at once. The client was relieved, light and free.

We finished the session. The client was puzzled about what had happened. It was then that he told me that he was in fact a volunteer firefighter. He told me about what volunteer firefighters do. He said that he had always had difficulty using a walkie-talkie. Talking on a mobile phone was perfectly fine, but using a walkie-talkie was a huge problem. I was able to explain spirit attachment and it made sense to him. He felt very good after the session and said the block was gone.

This session stuck with me for a while. I wondered if this client actually came to me because of this attached spirit. Perhaps he was directed to come a long distance to see me and to bring this spirit over with him because I would be able to help him. It felt completely natural for me to switch from French to English to give the American spirit the final instruction to depart for the Light.  I felt that the spirit needed to hear some friendly words in his own language so he could leave in peace. Even my client commented on it. He said that it was strange that the energy reacted to my words in English though the client himself didn’t understand what I was saying. The vibration of the language is what makes us feel at home. Our session was a transit point to the spirit’s real home. I still wonder how it works that through time and space a person’s past life open-wound attracts other “things” from other realms on the earth-plane.

In the session the spirit just gave his first name. I had my client’s well-being in mind so I didn’t even try to keep the spirit for more questioning, so his full name remains a mystery. Although, later on I did a little research on the Internet to find his identity. I discovered that there were five firefighters with this name who lost their lives in the World Trade Centre catastrophe. There was also a seemingly unrelated remark in one of the chat-rooms. It mentioned that someone was trying to call on a walkie-talkie to initiate a quick evacuation. The call was apparently never received. The person perished. [Ed. The author does not want to give away the reference to respect the identity of this first responder who perished.]

This lost spirit case also makes me wonder how many Christian masses and services were given in memory of those who lost their lives in the World Trade Center in 2001. How many prayers have soared up to the skies but did not open a door to the Light. Or did they? If so, then what part of the energy of the soul gets stuck on Earth and just clicks into someone else’s body until the wound heals?

The more we work and the more we investigate in order to help healing, the more we get to know. Our minds stretch and our comprehension expands. This was an extraordinary case, and I am happy and grateful for the experience.