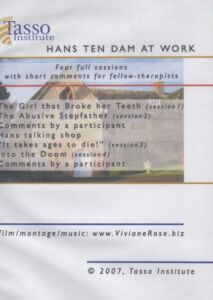 Before this session, Hans discussed the concept of confusion and dis-associative/associative induction. The therapy deepens and increases the confusion. He stated that after a person gets to the point of catharsis then you focus on integration and then rejuvenation.

In this session the woman did not have a specific incident to work on, simply a feeling of being confined and not having enough space. She talked about having had surgery during childbirth and then getting an infection which she was told was surgery related – but, intuitively, she felt it was due to something else.

This issue was triggered by recent dental surgery. The woman stated that she felt disempowered because she was not heard by the doctors and also, felt anger. The feeling of confusion was prevalent and so Hans had her focus on the feeling of confusion and go deeper into the feeling. She stated she felt tight and smaller so he had her go into being tighter and smaller – again, moving more into the feeling of confusion. As she focused on the feelings in her body she went into a past life in Egypt when she was a young man who was crushed by a large block of stone. Half of his body was pinned under the stone and he was left to die. He took several days to die because he was so young and healthy. Once the precipitating event was found and catharsis took place, then he focused on integration and then rejuvenation by bringing back what was lost.

This session was focused on personification and energy work and in the process a shift in the person’s perspective. The focus of healing is based on understanding rather than forgiveness.

Talking before the session Hans discussed technique and then stated that at one point he appeared to take a wrong turn and then stated “so what.” I loved that comment because it is a reminder to all of us that it’s okay to make a mistake. If you make a “wrong turn” and realize it, correct it. It’s okay! That’s how we all learn. Han’s does a tremendous job because he is not afraid to make a mistake and has learned to trust his instincts. If his question is not taking him in the right direction then he changes it.

His technique of following the energy is simple yet extremely effective. As he follows the energy, he addresses each part and makes sure each is heard and addressed and healed which I feel is extremely important for deep healing to take place.

The client’s step-father had abused him growing up and even though he had gone to traditional therapy to heal the issue, he still felt anger and feelings of helplessness. (His step-father had passed on some years before but the hurt and anger the client felt was still prevalent). In the beginning of the session, Hans had him go into the room with his step-father as the child until he was grounded in the emotions of the ten year old, then he had the adult come in and help with the healing work. Hans used a technique which darkened the room and helped the client see the energy of the step-dad and go into why the step-father acted as he did. He worked with the child, the adult, the step-father, the step-father’s father and past-life parts. All the while following the thread of energy, honoring and respecting each part that needed attention and healing so that, at the end of the session, the energy was healed and released for all involved and the client came away with an entirely new perspective of what happened to him. With understanding, forgiveness was no longer an issue.

Forgiveness is often the goal of clients coming to therapy but is one of the most difficult goals to obtain, especially when the abuser has passed on without any acknowledgment or remorse for the abuse that took place. Understanding and the subsequent change in perspective superceded the need for forgiveness. It became a non-issue.

This session was focused on inner child work. Hans stated that when doing inner child work, go to the original situation and have the person feel like the child. Once the person is grounded in the feelings of the child (often confused) have the adult personality come in and help the child. In this way the emotional load is shifted from the child to the adult. Hans discussed his approach to regression therapy as threefold. He combines regular therapeutic techniques with personification and energy work. This session was about a young woman who fell and knocked her teeth out while coming off the skating rink when she was eight years old. Hans commented that it is important to be aware that a childhood accident has multiple repercussions and has affects in the body, mind, and soul. As the session progressed he worked with her feelings of helplessness, the aspects of self that were lost and where she was holding the energy in her body. The energy held in her body led her to a past life where she was hung and then her body was kicked and burned. At the moment of the ice skating accident, the energy of self-confidence was lost and only when the past-life issue was addressed was the child able to take back what was lost. Hans worked with the past-life part, the adult, and the child and focused on each part as healing and integration took place.

This session was focused on using the techniques of Core issue exploration; soul parts; and some shamanism. The focus was on peeling off each experience by looking for what is under it, going deeper each time, always going for the deepest experience and emotion.

The session was with a woman who had expressed issues regarding her pregnancy. (Their pre-session discussion was not taped) He started the session having her state over and over “I can’t get over it” and as she made the statement she focused on her pregnancy and how it felt and the idea that she couldn’t get out of the experience. Hans had her focus on her womb and the feeling of being doomed; to sense the doom at a deep level. She then went into a deeper experience of being in a cave that was very dark and dense and feeling a profound sense of doom. Hans then had her go deeper into the sense of doom, the feeling of the cave (cold and wet) and she went into a deeper sense of doom. As he had her go deeper, he would say “don’t worry, go deeper, just feel doom, disappear into the doom” helping her to feel safe enough to face the deep feelings. He had her find the part of her that was missing in the cave (shamanistic soul retrieval) and she found a part of herself represented by a fox and the qualities of intelligence, humor, etc. that had been lost. Once again following the energy, bringing back that which was lost. Having him explain the technique and then watching it was very helpful.

Hans’ format for the various therapeutic techniques was very easy to follow, the concepts were clear and he gave several different examples on how the concepts worked. His process is simple and user friendly. It is a process that you can use immediately although it is also one that will become more fully developed as one uses it. I found it very worthwhile and would love to have him showcase more of his work in this manner so more people can benefit from his techniques and expertise.

Hans TenDam at Work is a set of two DVDs and can be ordered at Tasso by paying € 25,- including postage by PayPal or by International Bank Account Number transfer to Tasso Uitgeverij, IBAN: NL22INGB0006852868, BIC: INGBNL2A. – See more at: http://www.tassointernational.com/books-of-hans-tendam#sthash.NCBTcU4J.dpuf