Reviewed by Thelma B. Freedman, Ph.D. 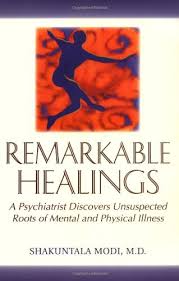 Those of us who work with past-life and/or spirit releasement therapies have long anticipated the day when Shakuntala Modi, M.D., a psychiatrist for over twenty years, presented her findings to the world, and she does not disappoint us. Indeed, she gives us more than we had hoped.

Here she sums up her findings from eleven years of working with psychiatric patients with a wide diversity of symptoms, with different types of therapies. Modi uses an intricate mix of past-life therapy and the therapies of spirit releasement and soul integration, as called for by the particular patient’s needs and insights. Following her patient’s lead, she found that although many problems seemed to stem from past lives, others seemed to be caused by attached spirits and/or soul fragmentation, and these were often intertwined. Examining the past lives, releasing attached spirits, and integrating the soul fragments resolved the problems. Modi gives good case studies throughout the book to illustrate the many ways she worked with the various conditions.

Of special importance in Modi’s work are her findings about schizophrenia and Multiple Personality Disorder (MPD, now called Dissociative Identity Disorder, DID). By any methods, even Modi’s, these disorders take long and careful therapy when it is possible at all, and a great deal of determination and perseverance on the parts of both therapist and patient are required. As Modi points out, these patients must first learn to trust the therapist, and this is not easy for them. Schizophrenics must also learn to relax and concentrate before any therapy can be attempted; Modi notes that sadly, not all of them can learn to do this. But Modi gives a detailed case study of her on-going treatment of a paranoid schizophrenic patient with her eclectic mix of methods; the patient shows steady improvement.

Modi also gives us case studies of several DID patients. There are other case studies of treating a variety of psychiatric and medical problems, including a case of ulcerative colitis. For all of these patients, a complicated tangle of current and past-life trauma, attached spirits, and soul fragmentation was found to be responsible for their plight.

As Modi describes her methods, they are not for the faint-hearted or the novice therapist. A great deal of careful training would seem necessary before one attempted to use them. But her results are impressive, especially for people with major psychiatric and medical disorders, and warrant serious consideration by physicians and psychotherapists of all kinds.

Modi also gives us her conclusions about her findings and what they tell her about the spiritual basis of human life. Some may find her too speculative here, but she bases her conclusions on what her patients have told her under hypnosis, not her own pre-conceived ideas, and this has a certain force. Modi has been listening to her patients and keeping records and drawing conclusions, and they are well worth everyone’s attention.

Despite its immediate usefulness to professionals, Remarkable Healings is written in clear language with a minimum of jargon, is painstakingly thorough, and can be easily understood by professionals and laypeople alike.