An Essay on Emotions in Regression Therapy – Hans TenDam (Is.30)

Home JRT Article An Essay on Emotions in Regression Therapy – Hans TenDam (Is.30)

Our mind-sets are coloring and flavoring our experiences and our behavior through our emotions. They are focusing and structuring our experiences and our behavior by our mental programs. They influence our physical condition, and they are influenced by our physical condition. It is difficult to be happy or angry when we are weak. It is difficult to be curious when we are sleepy.

If we would list all words in the dictionary that describe mind states we may come up with a few thousand. If we would take out the synonyms (no easy matter), we would still end up with a few scores of years.

So what are the primary mind states that we come across in regression therapy? And how should we list them? Let us start with the main emotional flavors. Regressionists often call these ‘charges.’

All over the world seven emotional states are recognized from facial expressions: sadness, happiness, anger, fear, surprise, disgust and neutrality. What does that mean? First, these emotions are expressive. They communicate themselves, even if we don’t particularly want them to. Second, their expression is independent of culture. Third, they involve the body. So they are basic in the sense of pre-historical, primitive. Most likely, Stone Age (8,000 BCE-2,000 BCE) people will have had them already.

How do we meet them in therapy?

Happiness: High-energy. Usually in short supply with clients. Rather often associated with childishness. Can be found and actualized.

Sadness: A common low-energy charge. Depression is the usual label. The body is dragged along.

Anger: From irritation to impotent rage. Loss of control is imminent. Violence is lurking.

Fear: A clear-cut case for therapy. Can be high-energy (running) or low-energy (freezing and paralyzing) or both (panic).

Surprise: Persistent surprise is child-like; inability to be surprised is robot-like. Control freaks dislike surprises, either out of fear or out of disgust. Surprise itself is rarely a case for treatment. Fear or disgust underlying obsession with control is.

Disgust: Together with fear in horror. Fear is for what is still outside. Disgust is for what is almost inside – or already inside. Anger, fear, surprise and disgust are related to our boundaries.

Neutrality: The indifference of a robot or the serenity of an angel. Or in-between: like in autism. Psychopaths are often robotic. Calm and rest and peace and serenity are sought-after states of neutrality. For Buddhists and scientologists the acme of their art.  For regressionists a problem – or a half catharsis.

In frustrating work situations, disgust and fear may join hands. Disgust with what is and fear for what could be—if we would leave the disgusting work conditions.

Besides the anger-sadness knot and the disgust-fear knot, we have the surprise-neutrality knot—when we feel aliens, outsiders, and feel disconnected from society—even from reality. Things seem strange, but we are surrounded by them, and we can’t escape them, so we try to disconnect from our emotions into neutrality. All these knots prevent happiness, so we become addicted to drugs, to music, to reading, to being in love. 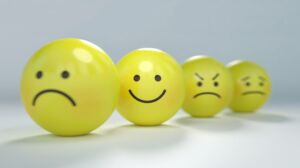 How do these ’basic’ emotions present themselves if they are simply themselves?

Happiness: I am the state of overflowing energy and zest for life.

Sadness: I am the state of weakness and loss. I float and drift and bob up and down and tend to dissolve.

Anger: I am the state of power. I overcome resistance. I am destroying or threatening to destroy what wants to invade.

Fear: I am the confrontation with danger. I run and hide.  Or I freeze and die. Anyway, I don’t want to be here!

Disgust: I am repulsing what invaded or what is about to invade. (Anger is against what is still outside.)

Neutrality: I am the state of business-as-usual.

Surprise: I am the discoverer of business-unusual.

These states rarely stay internal. They express themselves and so communicate themselves to others.

Happiness: I am glad to see you! Come closer! But don’t hamper me, please!

Sadness: I deserve your sympathy and consideration. Help me!

Anger: Go away! I will defend myself if you come closer. Or I will attack you if you don’t disappear.

Surprise: I hadn’t expected you!

Neutrality: Oh, there you are. But you could have been not here as well.

Happiness and sadness invite others to come closer. Anger, disgust and fear tell others to move away. Surprise and neutrality don’t tell others what to do. In anger and disgust, we close our mouth. In fear and surprise, we open our mouth. Neutrality is ignoring. Fear means wanting to be ignored.

Which are common cases for treatment?

Other chronic states could be suitable cases for treatment, but rarely are because the sufferers don’t suffer under the condition—rather other people do.

In my practice, emotional problems of clients often come in pairs. The most common are the basic responses to frustration—anger and grief, often at the same time. Anger and fear are the second most common couple. Shame and guilt come later. Fear is often tainted with disgust. Neutrality can be a real challenge. It often is a response to raw pain: physical pain, psychic pain and spiritual pain.

Are the other mental states varieties or combinations of the ’basic’ emotions? Not necessarily. The basic emotions are emotions that people from very different cultures recognize from pictures, basically portraits. But if we include the complete body posture, other states may become recognizable. If we include movement, again other states may enter the list of universals. Insecurity, for example, could be expressed by hesitating body movements and shifting looks.

Anger wants to express itself in action, in the extremities. Stamping or kicking, slapping, hitting or punching. Among civilized people, aggression tends to become verbal: shouting, insulting, swearing. Biting is a more atavistic response, only very rarely indulged, and then usually by women in the author’s experience. At least we can bite on our own teeth and clench our jaws.

Emotional states like despair may be expressed in cultural conventions like throwing the hands in the air. Expressions of love have a culturally determined choreography.

Other states, like shame and guilt, may not be as easy to recognize as “not showing” is part of the emotional state itself.

Also there are states that are more introverted and more gentle and don’t show so clearly, though they all seem to involve the body, such as a show of satisfaction, chuckling to oneself, displaying self-assurance, tenderness, or goodwill. These states seem more like states of mind than emotional states, but they have an essential emotional flavor.

One more observation about our emotions and our body—we express emotions by expressions on our face, by our voice and by our gestures. If emotions overpower us, our whole body is involved: we dance from joy, we cringe from misery and we cry—not only with grief. But if we overpower our emotions, if we lock them away, we lock them away in our body. Many authors assume that specific emotions reside in specific body parts. Though there may be some truth in that, I have become convinced that emotions may be locked in a body part because of a physical trauma at the time of an overwhelming emotion. If you feel desperate and at the same time numbed because the love of your life is leaving you and you stumble and injure your left knee, there may be a connection between despair and knee problems for the rest of your life.

And if we suppress emotions, the resulting tension may simply go where our body is weakest. Stress may collect itself with one person in the spine, with another in the intestines and with a third in the throat, depending on where the body is weakest and least healthy.

Possibly, the more mental content and the more communicative, the more the expression of the state is culturally malleable. Love essentially requires more subtle communication than hate, so the forms are more culturally determined, and less universal. Though there is convergence between cultures. Internationally, the dominant patterns to express love are shaped by Hollywood—and Bollywood.

In my experience as a regressionist, the people that most easily express emotions are the Brazilians. No wonder their telenovelas and their carnival are international successes. The people that least easily express emotions are the Japanese. And the basic emotion least felt, least expressed in Japan is anger. Therefore violence is highly ritualized there.

Now the largest concentration of Japanese outside Japan is in Brazil. Interestingly, it seems they as easily express emotions as neutralize them. Possibly, they could make the best therapists to deal with clients that have emotional problems.

There is one other aspect of emotions that is worth mentioning. Many people who rebel against the dominant rationalism of our time declare themselves to respond more from their feelings. They speak about emotional intelligence, and they defend their choices and their judgment by statements such as, “that is just how I feel about it.” It is an effective discussion-stopper. Another statement such as, “I just feel he can’t be trusted,” when combined with real or imagined psychic gifts become unassailable.: “Her aura is superb,” “This room has a dark presence.”

People who say such things could be hiding from others—as well as from themselves. Their emotions follow thoughts. They just think that somebody can’t be trusted, but if they would acknowledge that as truth uneasy questions could follow: Why do you think so?

How do we work with that in regression? We regress. We suggest the client to go back to the first time this thought was thought or the first time this feeling was felt. Then we find the reasons for the thought—the root of the mind set. We may find that it is often a reaction to a rather intense experience. Or it entered their mind through the more or less hypnotic presence of another person. We may even discover that their emotion isn’t their emotion at all. Rather it has piggybacked on a hypnotic message from somebody else. Few messages are really neutral, most are charged. Sometimes, even neutrality is a charge—when it is a mind state that is a kind of trance.

Emotions flavor our problems and our solutions. They flavor our sessions. We should be able to taste them without getting carried away with them. The ideal therapist is like a Japanese-Brazilian. Dutch people hardly qualify; they are too blunt.

At least that is just the way I feel about it.