The author discusses the research into the neurological correlates of meditation practices. There seem to be two general types of meditation, each with its own neurological signature. These are compared to regression therapy, which is hypothesized to be a third type. During meditation brain activity changes: in frequency, in location, in coherence. Meditation practices of the concentration-type eliminate all mental content, emptying the mind of everything besides the concentrating mind itself. Meditation practices of the mindfulness-type stay with the actual moment and all that entails, inside and outside. These practices focus on or contemplate what is present, while being as calm and complete as possible.

Regression seems a third road, though the results may be comparable. Meditation is attentiveness training. In regression we don’t train attentiveness; we induce a natural flow of awareness from experiencing a problem, discovering its source, and flowing towards its solution. Regression seems more comparable to absorption of the attention experienced in reading or hearing stories, listening to music, or after hypnotic inductions. Meditation can be therapeutic, especially for depression. The meditator learns to see negative thoughts as observable mental contents rather than the self. This is also true for regression, though we rarely consider it in this way. Only when a regression leads to catharsis does the similarity with meditation become striking. A deep catharsis approaches the mystical qualities of deep meditative states.

Further neurological research won’t improve that process, though we may discover what neurological conditions may hinder or limit regression experiences and their therapeutic results.

Some time ago, I came across an article that reviewed 50 years of neurological research on meditation and similar states. I devoured it. What did I learn? Quite a lot, and not so much. What does brain research of meditative states teach us? Quite a lot about what is happening inside the brain. Not so much about meditative states, though it may give some pointers as to what may happen in the brain during regression.

The summarized research gives an idea of what is happening in the brain during meditation and what is typical for the brain of experienced meditators, even when they are not meditating. Different kinds of meditation have been compared: Yoga, Vipassana, TM, Qigong, guided meditation, Zen, Christian prayer, hypnosis, alpha-training. Qigong has meditators sense the Qi or subtle energy in the body and manipulate it by will, physical postures, and movements. Ananda Marga meditation concentrates on the breath, followed by mantra meditation.

I am not sure why all these research has been done. Maybe to explain meditative experiences by what is happening in the brain. But nowhere have meditative states been produced by changing something in the brain. And, yes, all of these brain states have been changed by meditation. It is like explaining the behavior of cars by what is happening inside the car and considering the people driving them as concepts rather than reality.

No general difference in hemispheric functioning has been found during meditation. Appetitive and approach-oriented emotions are characterized by a left-over-right prefrontal activity; avoidance and withdrawal by right-over-left prefrontal dominance. Left dominates in happier states and traits; frontal left or right dominance is related to approach; frontal right dominance is related to withdrawal.

During meditation, alpha and theta waves become coherent within and between the brain halves. Alpha coherence increases during episodes of thoughtless awareness or transcendental experiences.

Experienced meditators show more theta and alpha, both in and out of meditation, compared with novices and with people who never meditated. The more experienced the meditators, the stronger the effects.

Alpha increases when the blood flow in the cortex decreases. Sensory stimulation and focusing attention decrease alpha. In meditators at rest, alpha is stronger compared with controls at rest. In early biofeedback studies more alpha correlated with less anxiety and feeling calm and positive. Increased alpha could be correlated with relaxation and with choosing to meditate, but not all meditation studies show an alpha effect. Meditation affects the distribution within alpha: slower and with more power.

In the long run, meditation may lead to increased theta rather than increased alpha. In comparison, concentration produces more theta, while the more passive form of meditation does not. With novice meditators, global theta was higher during resting than during meditation, implicating drowsiness as the source of their theta.

Long-term meditators had slower mean frequency and greater theta–alpha at rest, widespread increases in theta and early alpha, and more coherent theta. Theta increases in the bliss state and decreases when thinking. Meditation focused on relaxation increases theta all over.

EEG meditation studies reveal an overall frequency slowing and stronger theta and alpha when in the meditative state. Findings of increased power coherence and gamma band effects with meditation are emerging.

Dopamine release increases 65% during meditation. That may explain its self-reinforcing nature once proficiency is attained. 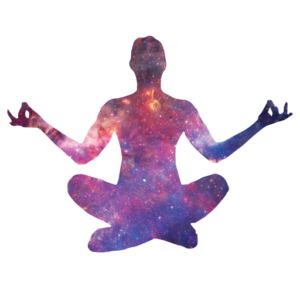 Research suggests a neural correlate for the altered sense of space in meditation. Several investigations have found brain activity typical for weaker self, non-self-boundaries.

Mystical experiences resemble psychiatric depersonalization, ecstasy, and drug-induced hallucination. Emotional and volitional detachment is common throughout meditation. Meditative and religious traditions include calm peacefulness, less internal dialogue, perceptual clarity and awareness merging with the object of meditation. Meditators observe thoughts and feelings instead of identifying with them and may have mystical experiences of blissful absorption into the current moment, named samadhi, nirvana, or oneness.

Some meditators consistently report feelings of love during meditation, although these experiences are often not the goal. In that state, some meditators showed greater frontal gamma than alpha. Also found was a significant increase in gamma coherence. For effective meditations, gamma may play a prominent role.

People exhibiting more theta, especially more frontal theta, experience less anxiety. This may be associated with feelings of peace or bliss and low thought content that have been correlated with bursts of theta. Hypnotic states also exhibit frontal midline theta, just as self-regulation by biofeedback does.

Long-term meditation leads to deep calm, increased comfort, heightened perception, and a different relationship to thoughts, feelings, and experience of self. States of awareness referred to as ‘the witness’ or ‘transcendental experience’ are also claimed to ensue. This contentless awareness independent of mental activities can be present during deep sleep. The sense of self shifts from a self-awareness centered in the body to an impersonal beingness with less separation between the observer and the observed.

Meditation increases well-being and lessens anxiety and stress. Mindfulness practice also has been shown to lessen pain, stress-related skin disorders, and to improve the immune system.

Mindfulness meditation has successfully treated depression and prevents relapse. The key seems to be—and this is also interesting for us as regressionists—to experience negative thoughts as observable mental contents rather than as the self. 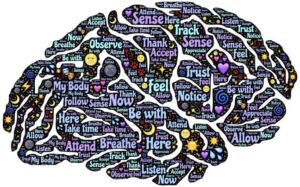 A different light on regression therapy

A number of the concomitants of effective meditative states are encountered in regression at the time of catharsis. In research into brainwave patterns during regression, the simultaneous appearance of beta and delta waves resembles somewhat the incidence of both lower theta and of gamma frequencies during meditation. And a deep catharsis approaches the almost mystical qualities of deep meditative states.

The way we regressionists try to reach catharsis is almost the opposite of what meditators do: we enhance the negative mind state of the client and use that as a direct way to discover the origins of that negative mind state. Paradoxically, welcoming the problem, evoking it, has at the same time an associative and a dissociative aspect. It becomes something within us that we can handle. The handler and the handled become two. The contents of a regression session also become observable mental contents rather than the self, no matter how intense they are experienced.

Also, paradoxically, while we are enlarging the self our more inner self becomes the subject, and the problematic self becomes the object. When we allow our emotions, our bodily sensations, or thoughts to appear, they appear as actors and acts in the ring of our inner circus, while we are—however engrossed—the spectator. The fact that we work with subpersonalities and ego-states, strengthens the center instead of confusing and blinding it. That is, with the exception of psychotic and borderline people—which is why we rarely work with them, at least not straightaway.

The regression experience seems a third road in addition to concentration and mindfulness. It is not about exorcising the troubling and confusing contents in our mind; it is not about calming them, but about unshackling them and giving them full space in the ring. We dissolve chaos by setting it free and letting it run its natural course.

Neurologists will be interested in finding out what’s going on in the brain during an effective regression. Júlio Peres from Brazil studied patients who had regression experiences during a MRI-scan.

It will shed new light on what is happening in such moments in the body. It won’t shed light on the regression process itself, though we may discover what physiological conditions may hinder regression experiences and their therapeutic results.

The limited brain research that has been done into regression experiences has focused on the possibility of regression experiences being like reliving known memories and not like engaging in fantasies. It might be more interesting to find out what happens during reliving traumatic events and during catharsis and healing. Of course, such processes will be hindered by measuring equipment and research conditions. Nonetheless, similarities and differences with meditative states may be enlightening.

Do you like this article ? You can visit the page of the Issue for more information. This article is on the Volume number: XXIV and it is published at: 01-03-2016 You can also visit the author profile for the bio.