Development of Life Quality by Past Life Regression Therapy together with an Integrated Psychological Approach (Is.29)

Home JRT Article Development of Life Quality by Past Life Regression Therapy together with an Integrated Psychological Approach (Is.29) 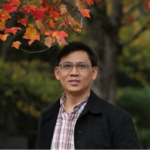 The purpose of this study was to determine whether past-life regression therapy can lead to better quality of life, more profound belief about moral consciousness, and better psychological well-being. This quasi-experimental research included a control group designed to test these hypotheses. Each experimental participant underwent three past life regression sessions facilitated by two qualified regression therapists, plus seven days of life improvement practice between each session. Participants in the experimental group had better scores in quality of life than those in the control group. Within the experimental group, scores on moral consciousness as well as quality of life and psychological well-being improved and was statistically significant. The roles of past life experiences and lessons learned in past-life regression were also examined.

Past Life Regression Therapy (PLRT) along with the use of an Integrated Psychology Approach consists of guiding the participants by using PLRT and past-life lessons learned counseling to design new life improving practices (LIP). Ian Stevenson (1966) maintains that PLRT is an effective means of facilitating self-development or of resolving various psychological difficulties. Woods and Baruss, (2004) mentions that in the absence of psychological problems, PLRT can improve psychological well-being.

Three assumptions were raised by the use of this therapy:

1) the abreaction of past life negative emotion can improve the course of
present life,
2) the increase of psychological well-being can improve life quality, and
3) PLRT together with LIP can lead to more insights and profound
understanding of moral consciousness.

Some believe that the negative residuals of unfinished business in a person’s past life have energy to attract negative similar incidents to a person’s present life. The residuals were buried deep in the subconscious level of mind, in which individuals are unaware of them. The abreaction of the negative residuals would therefore reduce negative incidents in the present life. In addition, Soon, Brass, Heinze, & Haynes, (2008) found that subconscious relearning is unique to the individual, and the individual who can recall their past-life memories would be able to learn life lessons from them. With proper guidance, the relearning of these past lessons allows individuals to receive suggestions from their inner consciousness on ways to improve their present life.

The researcher conducted the same regression therapy procedure and individualized LIP counseling for their daily practices to all 20 participants, in the experimental group. These 20 participants were asked to put on the biofeedback device (IOM Hardware, the Wild Divine Software Programs) to monitor the arousal state. The past life regression procedure began when participants reached the relaxed state. The biofeedback device provides information on the activity of skin conductance which reflects sweat gland activity and heart rate.

The idea was to evoke past-life experiences in all three pre-scheduled sessions (one week time interval) for each participant in the experimental group. Rivera (2012) concludes that the improvement in psychological wellbeing enables participants to see new opportunities for quality of life. The improved moral consciousness has direct impacts to their life improvement practices (LIP). The researchers hypothesized that the combination of improved psychological well-being and moral consciousness has direct impacts to improve participants’ life quality. Life quality in this research is defined as one’s perception on his or her physical health, mental health, and interpersonal relationship.

To make sure that the subjects have substantial past-life experiences, the treatment was designed to have three weekly sessions. The researcher gave the Moral Consciousness counseling after the regression therapy ended.

After the experimental subjects gained cognitive understanding and emotional insight, the LIP counseling began. This step-by-step procedure is believed to be intense enough to install lasting changes in the cognitiveemotive-behavioral levels within a 35-day period.

It is worthwhile mentioning that regression therapy is the treatment process at the subconscious level. While moral consciousness counseling is the conscious process after the regression therapy ends, during which spirituality is the main topic of discussion. LIP consultation is the final process focusing on behavior changes.

Research Design
The research methodology is quasi-experimental with one control group, and the experimental period is 35 days. Both quantitative and qualitative analysis are viewed as equally important and are applied in parallel.

The questionnaire used for measuring psychological well-being was the Psychological Well-Being Questionnaire which consists of 12 questions each with a five-point Likert scale to which respondents can agree or disagree.

The questionnaire items include questions such as Positive Relations with Others, Autonomy, Environmental Mastery, Personal Growth, Purpose in Life, and Self-Acceptance. [The finding reports decreases in negativity, and increases in positivity.]

The Life Quality questionnaire was modified and reselected to 20 questions, from an original 26 questions. These questions were designed to focus on participant’s evaluation of his or her perception of their personal changes in physical health, mental health and interpersonal relationship. This questionnaire uses a five-point Likert scale.

Moral Consciousness consists of a five-point Likert scale made up from three scales: nine items on Spirituality (faith in right conduct) and five items on Inner Growth. All 14 items make up a Global Scale that is an indication of a person’s position along the materialism/transcendent dimension.

Participants
Forty individuals between 25 and 60 years of age working at International Company Limited (ICC), Thailand, were divided into 20 experimental subjects (E), and 20 control group subjects (C). The inclusion criterion was individuals who are willing to improve their quality of life and those not willing were excluded. Those with a history of traumatic emotional events or those experiencing problems with concentration, memory were also excluded.

Procedure
The researcher used a dedicated room provided by ICC as the experimental lab. The researcher conducted the half-day opening workshop to explain regression therapy concepts and procedures to all 40 participants. The chairman of ICC gave the opening speech as this was one of their in-house development programs. The participants received the general experiment and the researchers clarified any misunderstandings about hypnotherapy.

At the end of this workshop, they were asked to complete a quality of life uestionnaire. The therapy schedule for the 20 participants in the experimental group was executed over a 35 day period composed of 3 regression sessions, each lasting 2 hours and a LIP counseling designed to last half an hour.

In each PLRT session, participants came individually and were required to sign a consent form. The instructions were given so that they felt secure and relaxed. The participants were discouraged from engaging in cognitive thinking during the guided regression, which lasted two hours.

Moral consciousness counseling and LIP counseling were customized for each participant, to enable them to improve their spiritual lives and their inter-personal behaviors. Participants were asked to complete a Moral Consciousness Questionnaire after each regression session. The questions focused on the past-life experiences during regression.

At the end of the study, a half day closing workshop was performed during which the researcher asked the participants to complete the life quality questionnaire for the second time. Then researcher shared some key findings and let all participants in the experimental group share their experiences about the benefits of regression therapies, moral consciousness consultation, and life improvement counseling. Finally, they were asked to complete open-ended questions of the life quality questionnaire, such as benefits, experiences and lessons learned.

Results
The Life Quality mean score of the experimental group before therapies was 3.560 and that of the control group was 3.505. Scores after the therapies were 4.028 and 3.643 respectively. The comparison of life quality by MANOVA showed that the regression therapy improved life quality in the experimental group significantly compared to the control group. 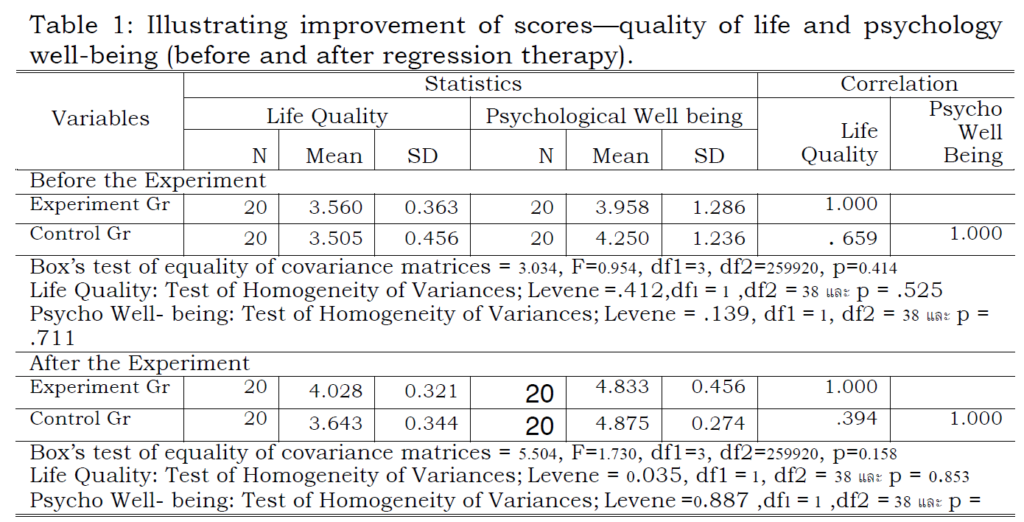 In the experimental group, changes in life quality and psychological wellbeing were in the predicted direction, from 3.505 to 4.028 or 14.92 percent and from 3.958 to 4.833 or 22.10 percent respectively. The improvement in the experimental group is statistically significant. In the control group, life quality score changed from 3.505 to 3.643 or 3.93 percent but it was not a statistically significant difference. Scores of Psychological Well-being changed from 4.250 to 4.875 or 14.70 percent, which is statistically significant. The improved score on Psychological well-being of the control group came from their participation in the Positive Thinking in-house training session conducted by ICC international company as their regular employee training.

Conclusions
This is a controlled study of the effectiveness of regression therapy with an integrated psychological approach to the life quality and psychological well-being. There was substantial correlation between the past-life regression therapy and improved quality of life, psychological benefits and changes in moral beliefs.The research was designed for participants to form courses of actions during LIP consultation that reflect their past-life recalled memories and Moral Consciousness experiences. However, there were no statistical variables designed to measure LIP actions towards quality of life. The researcher used the qualitative methods to collect information of this relationship, by means of interviews, and a workshop. It is advisable that the next research should design statistical measurement of LIP actions toward improved life quality. During the closing workshop, all participants attested that the improved moral consciousness from the regression sessions had strong impact on their perceptions. Therefore, this finding reemphasized the effectiveness of regression therapy for quality of life improvement.

Do you like this article ? You can visit the page of the Issue for more information. This article is on the Volume number: XXV and it is published at: 17-07-2017 You can also visit the author profile for the bio.