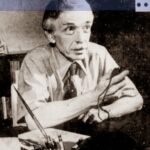 Late in 1986 I asked a colleague of mine to do a past-life regression with me to find out, if possible, why I was afflicted with polio. This conspicuous handicap has been with me since the age of 14 months—which is to say, longer than I can consciously remember. It affected both legs and the lower spine and entailed the use of two leg braces and two crutches to enable me to get around. As I look back on it from today, there is no doubt that it has had a profound effect on my life history.

My parents sent me—wisely, I think—to a regular public school. But when the alarm was sounded for fire drills, I was exempted from them so I would not have to struggle with the stairs. As a result I would sit alone in the empty classroom in the empty building, fantasizing a fire in which everybody escaped but me. I begged for permission to go out with the rest of the class, but this was categorically refused. The reason, as I learned much later, was that my mother was afraid I would fall on the stairs and hurt myself. The effect on me, of course, was to make me feel that in any life-and-death catastrophe I would be one of the ones elected to die.

In my second school year I was transferred to a school that had a special class for the physically handicapped. Children of all pre-high school grades were picked up by bus and taken to this one classroom, where they had one teacher, much as in the old fashioned country school.

I remember my embarrassment at the moment we all left the bus and made our way into the school building with an assortment of crutches and canes and limps and hobbles. Though I loved many of my classmates, I did not want to be identified as a member of a group distinguished by limps and hobbles.

There were great compensations, however. I was fortunate in having an exceptionally able and loving teacher who took a strong personal interest in me because I was a bright child. She would sit with me during recess and go over my schoolwork with me, motivating me with love and excitement to study with all my might. As one result, I began to skip through classes at high speed, graduating to high school at age 12 instead of 14.

Meanwhile my stepfather, a physician who was a little ahead of his time, was encouraging me to use my better leg as much as possible without any brace and to gradually discard my crutches in favor of a cane. By the time I finished with this school I was getting around in a far more normal manner and feeling pretty good about myself.

High school, however, was another story. While my classmates were making names for themselves on the baseball and football teams, I was confined to the chess club, the debating team, and editing the class paper. And when it came to dating, I was just not included. I quit high school a year before graduation.

I began job hunting, and by rare good fortune got onto the Wall Street Journal, where I worked my way up to an editorship. This was followed in succeeding years by jobs on the New York Herald Tribune, the New York Times, Venture – the Traveler’s World, and Medical Economics. And after a late start I also began making friends with girls, finally becoming a family man- But not a very happy one. 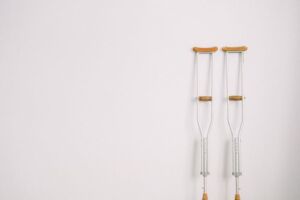 In my 11 years of standard psychoanalysis, my polio came in for only the most casual kind of mention. I’m afraid I was trying to pretend to myself that it was really a very unimportant factor—and I was somehow able to steer my analysts away from the topic. It was not until much later, through past-life regression, that I began to gain some insight into what meaning this affliction might have for me.

The regression was undertaken, at my request, with a colleague, Anne Ruderman, who used hypnosis to guide me into a relevant lifetime.

I found myself in ancient Greece, where I seemed to be a man of means occupying an official position of some importance in my city. I had an attractive wife and a charming little girl whom I loved dearly.

When Daphne, my daughter, was seven or eight years old, she became very friendly with a little boy who lived next door. Neleus, as this child was named, walked with a severe limp because one of his legs had been shrunken by disease. He was likable enough, and I had no qualms about him, even after the friendship had gone on four or five years, and it was becoming clear that Daphne was getting more and more attached to him. The boy’s limp was becoming more conspicuous as his body grew up faster than his stricken leg. But this in no way seemed to dampen Daphne’s affection for him.

I reasoned however, that Daphne would soon be interested in young men with strong athletic bodies, and I did not let myself worry about her strange friendship with Neleus until she was 17 years old. About that time we had a scene, which I relived vividly in my regression.

We were in my home and Daphne, her eyes glowing, was telling me that Neleus this day had proposed to her—and that she had accepted. My reaction was one of shock and outrage. I told my daughter immediately and in strong language that under no circumstances was this marriage going to take place. No child of mind was going to be married to a cripple! She must get that idea out of her head right now and forever.

“Why, Father? Why?” Daphne pleaded tearfully. “Neleus is a wonderful man!”

I tried to calm down so that I might express my views to my daughter. “No cripple can be a wonderful man,” I explained gently. “They are all alike—cowardly, dependent, sponging on others, useless appendages on the body of society. You could never be happy with such a person, Daphne.”

“But Father, Neleus is not like that. He’s the most wonderful young man I know.”

I felt my anger surging up again. “Daphne,” I told her quietly, “I have said all I am going to say on this matter. There will be no marriage between you and Neleus. That is all.”

That night Daphne stabbed herself to death.

In the next scene of my regression my wife was telling me with great bitterness in her voice, “You killed Daphne! You did it just as surely as if you had put that knife into her breast yourself.”

I found myself arguing that I was only trying to do what was right in the interest of Daphne’s future happiness. But my arguments seemed to make no impression on my wife, or, for that matter, on me. Though I kept trying in the succeeding days to convince myself that I was blameless in this tragedy, I could apparently do nothing to allay my feelings of guilt and grief. Those feelings followed me to the end of that life.

Is my polio in this 20th century life a punishment for letting my unfeeling attitude bring about my daughter’s death? I don’t think so. I don’t hold with the eye-for-an-eye school of thought, nor can I imagine a supreme being so vengeful as to reincarnate us for the sole purpose of making us pay for our sins or errors or blind spots in a previous life. Rather, I have come to look on it as a gift, enabling me to understand the afflictions of others, to enlarge my horizons and to become, I hope, a better person. I like to think of each reincarnation as another opportunity to grow, starting pretty much where you left off in your previous life. I certainly wouldn’t like to approach my final years with any other kinds of belief. I hold to the conviction that every bit of growth I can achieve in this life will help me get off to a better start in the next. And that makes the challenges of living worth meeting right up to the moment of death.

Let me explain how I feel reincarnation has worked for me. In my younger days in this present life, I had much of the same arrogance I displayed in my Greek life. I was contemptuous of persons who were—in what I felt was my expert opinion—stupid, mercenary, meek, overbearing, pretentious, dull, or what have you.

I suspect that I was even contemptuous of persons with orthopedic handicaps, since I was constantly refusing to acknowledge that I really belonged in this group. I avoided, whenever possible, being seen on the street with another person similarly handicapped; I felt I would automatically be labeled handicapped by association. In brief, the arrogance and shortsightedness I exhibited in my Greek life seemed to cling to me in this one.

Underneath this arrogance, of course, was a deep sense of my own inferiority, rarely if ever consciously acknowledged. After all, anybody could see that I was just like Neleus. I was unable to compete with the able-bodied in strength, in speed, in sports, in grace—in so many of the physical attributes of manhood.

What was left for me? Well, I became a reader, a writer, a thinker, and, I hope, a more empathic human being. My arrogance began to fall away, making place inside of me for a new humility. The humility in turn taught me to understand and then to love and admire people I formerly would have held in contempt, including some wonderful handicapped persons. In turn, others began moving closer to me. I attracted some great friends. Desirable women whom I had assumed to be far beyond my reach became interested in me, some even to the point of intimacy.

My new humility drew me into an ever-deepening involvement in psychology and a desire to help others. Little by little it led me into the exciting fields of psychotherapy, hypnotherapy, and past-life therapy.

I might have enjoyed far greater material success and settled on a lifestyle at a much earlier age if I had grown up with an unimpaired body. But looking back, I would not trade my handicap for that lifestyle. Polio has given me the inner fiber to face life with a sense of adventure and joy. It has brought me the deepest kind of happiness and fulfillment through work and love.

Do you like this article ? You can visit the page of the Issue for more information. This article is on the Volume number: II and it is published at: 21-03-1987 You can also visit the author profile for the bio.