The Negative Near-Death Experience (NDE), as we classified such at the first International Association of Near-Death Studies (IANDS) conference in February 1984, is an experience where the person feels fear, loneliness, isolation, and separation. The negative NDErs do not see the tunnel, the light, feel or see the presence of others, and do not have a positive after-effect feeling of the experience. Rather, they fear death and its impact.

We have been working with NDErs consistently since the IANDS conference. The percentage of negative experiences seems to equate to about two to five percent of all near-death experiences. Ring and Moody have also worked with the negative experiencers in attempting to research why some have such an experience while others seem to move farther beyond.

At the IANDS conference, Raymond Moody and Ken Ring initiated discussion on both the negative NDErs along with the psychic abilities of NDErs. We looked at the research and prophecy of the future according to experiencers.

In 1985 we began to utilize the past-life therapy research as a treatment form for assisting the negative experiencer. Marie, an L.P.N. who initially joined a nurse support group, broke down in the first session and told her story of a near-death experience that had haunted her for years. She was driving with her husband as the passenger and her three children in the backseat. Another driver hit their vehicle head on. The impact was so intense that her husband was thrown from the car and she was crushed behind the steering wheel. She was declared clinically dead and remained in the car for three hours while the Jaws of Life was used to pry her body from the vehicle. Her children had been rushed to the hospital emergency room. No one knew, or suspected, that another passenger was in the car. Her husband lay 80 feet away in three feet high grass and underbrush. 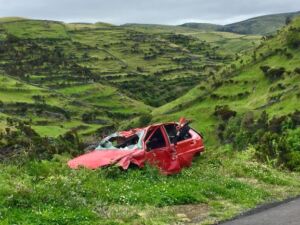 Marie remembered trying to get the paramedics and policemen to find her husband. In an out-of-the-body state, she would race to her husband and back again as she watched them working on her. She was frightened and unable to get anyone to listen to her. As the three hours drew to a close, a bored policeman rambled off into the grass. Marie followed feeling her husband’s pain as she tried, in vain, to usher the man to her lifeless husband. Suddenly, he fell upon the body, reacting and calling out for help. Marie was so relieved that the next thing she remembered is waking up behind the wheel of the car and seeing the horrified, frightened look on a paramedic’s face.

Marie’s experience had taken place twelve years earlier. When she attempted to tell anyone, including her priest, she was medicated and told it was her imagination. She did learn at a later date that she had been clinically dead for three hours. That information came to her from a coworker in her own emergency room where she was employed and had been taken as a patient.

Marie was extremely frightened of death and initially not receptive to the concept of past lives. Gradually, with individual therapy, she allowed herself to consider the possibility, since a near-death experience had been quite real. Hypnotic regression was begun, gently taking her into several past lives briefly, while concentrating on her deathbed experiences. She was allowed and encouraged to feel the peace, see the light, have a life review, and bring that feeling back with her.

It took several sessions for her to feel comfortable, but when she finally did, she was projected to her death bed vision in this life. Marie was living in fear that another NDE would happen when she least expected it. As she glimpsed her transition, which she felt was occurring at the age of 75, she saw how easily she slipped from her body once again. The fear of death, due to her negative NDE, has been lessened, along with her fear that death would come at a younger age.

Applying past-life therapy regression to the deathbed scene seems to provide a therapeutic basis for the individual who has had a frightening near-death experience. This tool has been applied much more successfully than other forms of traditional psychotherapy.