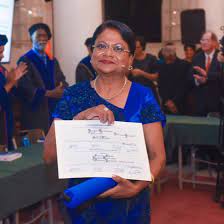 Kamla Nannan Panday-Jhingoeri was the first female psychiatrist in Suriname; completing her studies in 1981 at the Faculty of Medical Sciences of the University of Suriname prior to specialising in psychiatry in 1983. Post completion of her specialisation (partly in Belgium) Kamla settled in the Psychiatric Center Suriname, where she has been working since 1989. In 1990 she presented the findings of her graduation topic ‘Sexual Child Abuse Within the Family’ at a symposium of the Association of Medici; leading to a period of great social engagement around this previously taboo subject, and an intense devotion of time aiding victims of child sexual abuse, whilst also offering training in this area. She also co-founded and was the first chair of the Stop Violence Against Women Foundation. From 1992, Kamla laid the foundations for a more holistic approach within her field and followed new training courses; including hypnotherapy, neurolinguistic programming and transpersonal regression therapy. As a result, the treatment of her patients took on a more pluralistic character, by extending and combining the biopsychosocial treatment model with multiple treatment options for psychological problems; an approach perfectly attuned to the diversity of Surinamese society and greatly benefitting her patients. In addition to her practice, she was also active for many years as a teacher at the Faculty of Medical Sciences of the University of Suriname and was involved in the first scientific study on trance states in Suriname as part of an international study. This study, entitled ‘Trance in Schoolchildren: Report of a Study at Three Schools in Suriname’, was published in 2014. Over the past ten years, Kamla has mainly focused on research into the influence of culture in psychiatry and in 2019 became the first psychiatrist with a PhD at the University of Suriname with the thesis ‘Pluralism in the Treatment of Psychiatric Problems in Suriname: An Investigation Into the Contribution of Cultural Explanations to the Treatment of Patients with Mental Health Problems’.  Additionally, in 2021 the public version of her dissertation entitled ‘The Role of Trauma and Culture in Psychiatric Problems: Experiences from Surinamese Practice’ was published.