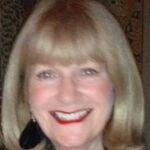 Shirley Johnson – was trained as a past life regression therapist in 1991 and as a hypnotherapist in 1992. Her work encompasses private consultations, groups and workshops and has worked in many countries. She is an astrologer (since 1980), and a journalist for most of her life, with several long-running magazine columns and radio and television programs. Shirley is a past president of the Astrological Federation of Ireland, founded a Dublin healing centre, Astraea Psychic Services, in 1995 and in 1997, co-founded (with colleague Ingrid Flanagan) IART, the Irish Association of Regression Therapists. She studied many holistic therapies, using aspects of these in her work where appropriate.
She is a tarot reader and an artist, with an MA in Film Scriptwriting. Shirley was born in New Zealand, later moved to Ireland and now divides her time between these two countries.