A Changing Perspective on Emotions in Regression Therapy – Hans TenDam (Is.19)

Here, TenDam relates how his views of the roles of emotions in regression therapy have evolved over time. He proposes that negative emotions have a proper and working place in our human experience and uses parts of sessions as illustrations of this point. He defines emotions in many different ways, such as communication, information, and states of being.

In my first years as a regression therapist, the role of emotions seemed clear-cut. Emotions were used to induce regression, to focus the session and to anchor the evolving train of events relived. Finally, emotions were the most noticeable part of catharsis.

However, in the course of the years my views on emotions have changed. Nowadays I consider negative emotions to have their own part to play. They do not need releasing; they do not need transmuting. Usually they need restraining, pruned, cut back like a cancerous growth. Sometimes negative emotions have to be released, sometimes they have to be cleansed, and sometimes they have to be repositioned. I will give examples of each.

Sometimes, after a good session still some part of the negative emotions remains. Although the patient may have experienced a rewarding catharsis, some of the loneliness, of the disappointment, the anger, the grief, or the guilt remains. Usually this means that the session is not completed. There is still something to discover and understand. We have to go back once more, maybe relive an aspect of the situation we ignored, or to relive another situation.

Sometimes, however, nothing new is found. Apparently, all relevant experiences were explored and all aspects have surfaced. When we then ask patients how they feel about this remaining charge, they may say to their own surprise that it feels all right. Then we ask what the function of this remaining charge is. On the other hand, it is OK to be there, but seems positioned in the wrong part of the body.

A woman felt weakness in her arms and legs related to her disappointment. After the session, she only feels a light disappointment in her shoulders. Somehow, it does not feel right on that spot. After we instructed her to feel the remaining disappointment flow toward the right spot, she felt it flows to her throat and then to her stomach. When asked for its function, her response was that this charge made her sensitive to the disappointment of others.

Maybe she has a rosy, innocent, naïve sub-personality who needs watching over. Her answer could also have been that this prevented overly optimistic expectations. Or she does not know and we suggest going to a future situation in which she experiences the function of this charge at the stomach. Her answer might then be that this spot would warn her against decisions that will result in disappointment. When it is strong, it may even stop her from taking a road that will lead to disappointment.

The negative emotions that remain after a good session may be highly functional. Sometimes the location may feel right, but isolated. Then we may ask to what it needs to be connected, or we suggest feeling that the charge is streaming or flowing instead of being stagnant. One answer may be that this spot is connected to another spot around the navel, which has to do with unshakeable self-assurance. The connection may result in a feeling of being able to stand any disappointment. Or it may prevent that self-assurance from becoming arrogant. Let me give some examples from my therapy practice.

Somebody has worked on a general feeling of weakness. The catharsis leads to a search of strength that is felt throughout to whole trunk. The client glows with it. Asked if there is any weakness left, he answers after some searching that at the tail of his breastbone remains a small center of weakness. Does it feel bad? Not really. So what is its function? It ensures that my strength will remain subtle, flexible; not brute, stupid force.

Another patient works on the general sense of isolation and coldness. Afterwards she feels warm throughout. Only her right hand remains cold and it is somehow connected to the feeling of guilt. How does she feel about that cold right hand? The coldness is not too bad; it is actually refreshing. However, that cold hand is not good. Imagine that the fresh coldness would go to another part of your body where it would fit better. Where would that be? It pulls up to a spot about the middle of my forehead. Feel yourself in a situation in which this cold spot in your forehead functions optimally. I can see everybody around me; to what extent they are warm and cold and what extent they need warmth or coldness. I can look to overheated people, feverish people and calm them. At least I can prevent that I loose my calm. And if people need warmth, because they are cold, I can perceive that without losing my own warmth.

Another client works on envy and jealousy. After the catharsis some of it remains. What should be done with it? Strange, when you ask this, suddenly see it rising out of my thought becoming a small line like a thread, stretching horizontally before my eyes. What is it doing there? I can see now the very fine division between what is just and what is unjust between me and other people and between other people in general.

After an extremely painful and horrifying experience, someone fills with black hate and hot anger. In the course of several lifetimes parts of this anger and hate are processed and resolved, but there is still something unresolved. In the session we find out how all this started. There comes a kind of understanding, and the harmony and love, which existed before the painful experience, are regained and begin to flow into the client. At the end of the session, she is in full possession of her original radiant power. Powerlessness, important rage, and hate are gone. Is there still anything hot in you? No. Is there still anything black in you? Now as you ask this, I feel two black spots in the palms of my hand. What do you want to do with 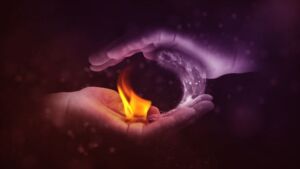 them? I do not know. Feel the difference between having those two black spots and not having them. If they are not there, I have lost something. They are my power to stop things.

Even negative emotions have their own place. Apparently, we often do not need to get rid of them, but we have to prune them, to restrain them, to assign them their proper place; maybe an essential place, maybe a modest place, but a proper place. Every emotion has its place in a balance with other emotions, just as the total of our emotions has to find a balance with the non-emotional.

Emotions are states we are in, how we feel our selves.

Emotions are also information. An emotion simply tells us that there is something the matter. We open the letter and even before we start reading, we feel suffocated. Somebody makes a sensible business proposal, but we leave the meeting with a headache. We accepted a marriage proposal, but now we feel tight and tense. Emotions, like somatic symptoms, tell us something. We may either listen to them or ignore them.

Rationalizing people tend to suppress and disown emotions. In the vernacular of New Age, they are in their head, not in their body. They depreciate emotions and somatics until they are burned out.

Emotions are our friends, even our soul mates; they are semi-independent parts of our own soul. We have to tame them and ennoble them, not avoid and denounce them.

Positive emotions may have to be pruned. A feeling of forgiveness may be so pervading that we no longer can defend our own space and become easy prey to parasitic influences. Even a feeling of love can be so pervading that we become blind and leak love into swamps and into dark whirlpools where it is absorbed and feeds its opposite. Well known is the hate of the grumbling receivers of charity.

Most people in most of our history have been over-emotional. So advise how to learn detachment and calm abounds. Many people are too detached, cold and dry, mental—or worse, spiritual—far from the murky recesses of the body and the physical world. They need emotions to prevent them from dying off while still in the body. They think they need to offer people a way out of fear. They do not realize that fear may point the way—toward a frightened forgotten part of us; just like depression may point the way toward a sad and lonely forgotten part of us.

There is no creation without emotions. We get only fluffy creation with positive emotions. Good for babies and infants; and for kind old people, slowly dying; less good for the rest. People who want only the positive emotions do not want to develop, but to be happy. That is OK, but they should stay out of the therapy room—and out of every other delivery room.

Do you like this article ? You can visit the page of the Issue for more information. This article is on the Volume number: XV and it is published at: 01-05-2004 You can also visit the author profile for the bio.