Separation Individuation Throughout The Ages – Daniel Hutt (Is.11)

Separation individuation is a cornerstone for good emotional health. Many psychological struggles experienced by people are directly related to this. The purpose of the article is to illustrate its scope and dimension. The interplay between past life and current circumstances will be explored theoretically and in a case study.

I am a traditionally trained psychotherapist who now utilizes past-life regression as part of my practice. It has occurred to me that many of the past-life connections clients experience in the regressed state are related to separation issues. Indeed, much of the work I do with regressive therapy appears to mirror the analytic concept of separation individuation.

The personality theorists define separation individuation as a developmental task a child goes through enabling him/her to part from the mother without fear of loss, abandonment, or annihilation. According to Margaret Mahler (1968), during the first month of life the infant is in a state of “normal autism” characterized by primitive hallucinatory disorientation. During the second month of life there begins a normal symbiosis where the mother and child function as if they are one. There is no differentiation at this point. At four to five months, the second symbiotic phase occurs with the beginning of the self. If all goes well, by the end of the first year of the child’s life, separation individuation begins.

The child who successfully masters this autonomous task will not suffer from the anxiety endured by those whose symbiotic attachment is developmentally stagnated. This dilemma can affect an individual throughout each stage of life in many maladaptive ways. Depression, anxiety, and object relations impairment appear to be the most prominent examples of this malady.

A contemporary illustration of this today also can be seen in the “codependency” movement. “Codependent” people are assigned a host of symptoms and syndromes but essentially they may be defined as people who have not moved beyond separation individuation. They are not self-governing individuals. They rely on others to help them define their reality and give them meaning and purpose. By contrast, a healthy individual, an individual who has the ability to experience his/herself as a secure separate entity and, at the same time, be intimately involved with others, exemplifies flexibility and balance. This may be viewed as a healthy paradox. Separation individuation means separate individual. In order to feel like a separate individual, a person has to have developmentally matured. When past-life or intrapsychic factors impede this growing process, problems occur. The disruption is an obstacle to change that can perhaps be labeled as pathological, oftentimes stunting an individual’s positive adaptation to the world.

Past-life therapy exponentially broadens the concept and definition of separation individuation, The roots of a separation individuation problem may be Oedipal or the root may lie in a maze of past-life experiences which has carried over into a current life situation, It is my belief that an understanding of both forces, the intrapsychic as well as past-life factors, is necessary for true change.

Sarah is a married woman with three children who has suffered from a variety of distressing emotional and physical symptoms for years. Her primary symptoms included panic attacks, separation anxiety, depression, and colitis. The second oldest of eight children, she grew up in a highly dysfunctional home. Perhaps the best way to characterize the family dynamics is to use the term of family therapist Murray Bowen (1978), “chronic undifferentiated family ego mass.” In this family there were no boundaries; utter chaos existed in a household where Sarah took on a parental role. She consoled her agoraphobic, highly narcissistic mother and did her best to tip-toe around her explosive, psychotic father. She cared for her younger siblings, trying to protect them from the daily eruptions between her parents. The defense mechanisms she developed were denial, rationalization, intellectualization, and compensation. This set the stage for a highly conflictual adulthood.

I originally treated Sarah with a standard course of insight-oriented therapy. Although she experienced some abatement of her symptoms, she was still far from cured. Her awareness and insight increased as to the “origins” of her conflicts, but she was unable to transform her understanding into everyday gains. One example of how the therapy did help was in her relationship with her middle son. She had over-identified with his problems to the point that if he were in psychic pain, she suffered as well, as if they were one and the same organism. She was successful in being able to detach sufficiently to distance herself from his problems without being drawn into them. However, when, for example, her husband traveled on business (which was all the time), she would still experience a gut-wrenching loss in anticipation of his departure.

Similarly, when one of her sons would leave for college, she would also experience crippling anxiety. Making decisions about basic expenditures, like choosing anything new or selecting an expensive item for her house, would at times become a major undertaking replete with worry and agitation.

I introduced the idea of trying a past-life regression, feeling that Sarah would be open to this based on her interest in psychic phenomena, shamanistic healing, and mysticism. She was quite eager, but at the same time somewhat frightened. She reported that her fear was based on her belief that she’d experience a painful event.

The first planned regression was unsuccessful. She was only able to see black space with an occasional view of sparkling lights. I taught her some self-hypnosis techniques, and at the same time she also began to meditate. This proved to be a helpful adjunct to the second regression. Sarah regressed back to an ancient desert dwelling society. She saw herself in a boat among a group of women wearing long flowing white cotton dresses.

Entrusted in her care was an infant. She was unsure whether or not she was the mother of the child. As she described the boat docking and her embarking with the child, her body suddenly and violently jerked and then became rigid. Another jolt of terror went through her when she described a group of soldiers on horseback who were attacking the people. In virtual hysterics, she relayed that the child was snatched by one of the soldiers. Although she did not actually see the child killed, she knew that this was the case.

Sarah’s second regression also demonstrated the theme of separation. She regressed easily back to a past life as a young American Indian boy in the late 1700’s. She immediately found herself in an extremely agitated state. Many months before her father had traveled away from the tribe for what she believed would only be a few days. As time went on, her fear, terror, anxiety, sadness, and dread exacerbated. Each passing day seemed an eternity. She would hold her own personal vigil each day, waiting in a meadow for the return of her father. On a snowy, grey winter day as she sat on her horse, she saw a solitary figure on horseback riding towards her. Her father had returned home after months weary, yet safe. She fell into her father’s arms and the overpowering emotion was almost more than Sarah could endure.

Both of these regressions proved to be a major turning point in her life and in the therapeutic process. The juxtaposition of the dynamics of her current incarnation and the trauma of the past-life separation issues has helped Sarah make significant changes in her functioning. She no longer experiences the anxiety associated with real or symbolic separations. 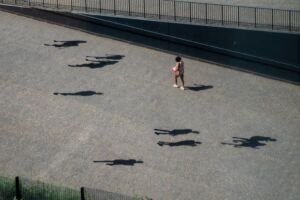 It must be noted, however, that the positive changes Sarah made did not occur immediately upon awakening from hypnosis. In my experience, a lifelong neurotic pattern such as Sarah’s may take longer to help therapeutically. Time and energy are needed to complete the “working through” process. This new knowledge had to be integrated in the same way that any other insight or catalytic agent would. We analyzed and processed the material accessed from the “movie reel” of her unconscious mind. After the regressions, Sarah’s affective responsiveness slowly, but perceptibly, improved. She was more open, more alive, more willing to consciously face her fears. Her dependence on me lessened as the transference naturally diminished. The transference changed because she had now finally internalized two things: First was what I represented to her symbolically—her alter ego. Second, and more importantly, she synthesized the parts of herself, her present awareness, and the traumas of her past lives, which were separated. She’d become a whole person because she now felt whole. Sarah had been so fearful of separating from certain people that she had lost sight of what they actually meant to her. She was now in charge of her life and no longer operated from a position of fear.

According to traditional theory, an individual who has never achieved separation individuation may exhibit “regressive” behavior patterns. This would occur when their security needs are threatened, as in the case of a death or divorce, the empty nest syndrome, or any other ordinary life circumstance.

Viewing this concept from the broader perspective of past-life therapy, we see that an analysis of separation individuation cannot be confined to standard psychoanalytic theory. If there is a carryover of emotional baggage from one or more past lives into the present, then the new psychoanalytic theory must encompass the entire past, the entire experience of the individual throughout the ages. Past lives, real or metaphorical, are a tremendous gift from the recesses of the unconscious mind. They allow us to create a new paradigm for dealing with the complexities of the human condition.