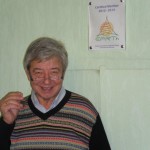 Pavel S. Gyngazov*, M.D., was born in 1947 in Tomsk, Russia. In 1976 he graduated from Tomsk Medical Institute with a degree in therapy. From 1976 through 1983 he worked as an obstetrician-gynecologist. Since that time he has been working as a sexologist and sexopathologist.
He has been involved in regression psychotherapy since 1993. By March 2004 he conducted over 2000 hrs in this original RT.
Pavel believes that this technique definite harmonizing effect upon patients, besides, it obviously provides complete recovery from various especially difficult psychosomatic deceases. Pavel is married with one adult son. Pavel’s spouse is a Ph.D. (candidate) in Philology.
In 2003 Pavel took part in the 1st World Congress for Regression Therapy in The Netherlands as a Workshop Leader. In 2004 Dr. Gyngazov’s article titled “Regression Therapy: Harmonizing Effect” was published in The Journal of Regression Therapy. Dr. Gyngazov plans to participate at the work of the 2nd WCRT in India as a Workshop Leader with a topic of “Human and Non-Human Reincarnations: Sequential or Random.”