When is a Failure to Regress a Real Failure? Traditional NLP may help. – Robert T. James (Is.18)

Home JRT Article When is a Failure to Regress a Real Failure? Traditional NLP may help. – Robert T. James (Is.18)

I feel certain that most therapists who use Past-Life Therapy in helping clients have had the experience, probably numerous times, of a client in hypnosis, who can’t or won’t regress. They all have probably developed methodologies for dealing with the problem, but I suggest using Neuro Linguistic Programming (NLP) principles for short-term results shouldn’t be overlooked.

I am a researcher in the past-life phenomena, not a therapist. Participants with whom I have worked were volunteers, knowing that they would be placed in hypnosis, and that an effort would be made to regress them back before their birth in their present lives. They not only volunteered to participate, but as a condition to participating in my research, they were required to complete a 32 question long Questionnaire. I tried to eliminate those who now, or in the recent past, were in therapy, including those who had gone through any serious physical or emotional trauma within the past few years. (James, 1993, 1995). I wanted to explore the past-life phenomena with healthy, enthusiastic, adults.

In my initial research, I worked individually with some 107 participants. I tried to work with one participant each day, coding the data that I was developing into a computer program before going on to another. I was generally having success regressing most participants, but from time-to-time I did encounter people, who although in a satisfactory state of hypnosis, for some reason did not or would not, regress.

Since I was generally acquiring the data I sought, I didn’t become curious about why some participants couldn’t or wouldn’t regress until I had worked partway through the entire group. The disappointment expressed by the non-regressors bothered me to the point where I began to ponder about what might be happening. Since these participants had voluntarily come to experience a regression, this failure to regress obviously seemed not a conscious behavior on their part.

I initially concluded that those non-regressors were (1) possibly unconsciously reluctant to give me the control they may have mistakenly thought a hypnotist obtained in a hypnotic trance, or (2) that some part of their subconscious minds had concluded that some incidents that had occurred in their past lives were better off left in the unremembered past. There was of course, the third possibility that some members of our species might not have had any past lives.

If I were encountering traditional resistance problems, then, could they be overcome without attempting traditional therapeutic techniques in an attempt to explore the root of the resistance? I did not want to attempt therapy, and it had no special function in my research.

Principles from my long-ago Neuro Linguistic Programming training concerning resistance came to mind. If what you are doing doesn’t work, believing that you have a “resistant client” just puts the blame on the client, shifting the responsibility. “…if what you do doesn’t work, do something else.” (Bandler, et al, 1979). Following NLP principles, I made the assumption that that part of the participants’ subconscious that makes them unable to regress, even though consciously the participants wanted to regress, is doing something on their behalf that benefits them in some way. My NLP solution was to attempt to establish contact with that resistant part and negotiate a solution, without ever knowing the root cause of the resistance. 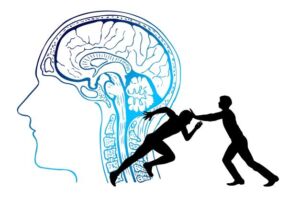 The dialogue with the participants while in hypnosis, went something like this:

I have respect for that part of you that is holding you back from regressing back beyond your birth in your present life to other lives you may have lived.

I am convinced that the part of you that is responsible for holding you back from regressing to a past life–is attempting to do something positive in your behalf–even though your conscious mind doesn’t appreciate it.

But now, I am asking that part of you that is responsible for holding you back from regressing to a past life -to consider alternate ways of helping you, and–in the following week or so–to prepare your subconscious mind to allow (name) to regress back before birth to lives you may have lived before your present life as (name).

I also stated, which as a therapist you may not wish to do, that it, the subconscious, had the ability to limit all or parts of the past-life material encountered that would be remembered by the conscious mind.

The next week I again placed them into hypnosis, and attempted a past-life regression. With the small number of participants with whom I used this procedure, most of the time but not every time, it was successful.

NLP treats resistance as a process; a nominalization. The process outlined above does not lead to an understanding of the root of the resistance, but may very well facilitate access to past lives for whatever you are trying to accomplish in a short period of time. In any event, you may wish to add this procedure to your arsenal.

Do you like this article ? You can visit the page of the Issue for more information. This article is on the Volume number: XIV and it is published at: 31-12-2000 You can also visit the author profile for the bio.